Antarctic Fox
The log of Rachel and Kevin Fox's trip to the Antarctic Peninsula in the Summer of 2008-9
Day 1: Penguino
December 26 - King George Island, Antarctica

With our bags and ourselves on the ship, we heaved a big sigh. We'd arrived! We had a few hours downtime consisting of lunch and some unpacking, and then it was right in to our first excursion. During lunch the ship had repositioned to an isolated part of King George Island where there was a thriving Gentoo colony, and a visit to the colony was our first outing.

Rachel and I got ready for the excursion with our base thermal layer, a fleece thermal layer on that, jeans, and a waterproof pant shell, along with our expedition jackets. Waterproof gloves over medium-weight glove liners, glacier glasses, wind-shielding snow hats, wellington waterproof boots, plenty of sunscreen on our 2% that wasn't already hidden from the elements, and we put our cameras, lenses, and binoculars into the Aquaknot dry-bag. We were ready to go on our first adventure!

As we'd learn quickly over the next few days, four layers of leggings was definitely overkill, and as time went on we'd get more cavalier about how much we needed to coddle our cameras and equipment, but on this, our first excursion, it was like walking on the moon: you're not sure exactly what you're going to need, and it's better to have too much than too little.

We met up in the 'mud room' at the stern of the ship where we donned our lifejackets and learned the proper way to enter and exit the zodiacs (always have a hand free for the 'zodiac grip') and the proper way to sanitize our boots and gear between landings to minimize the risk of spreading contagion from one penguin colony to another. A few minutes more and both zodiacs were full of Foxes with Rob and Tim at the tillers and we were off to visit the penguins! 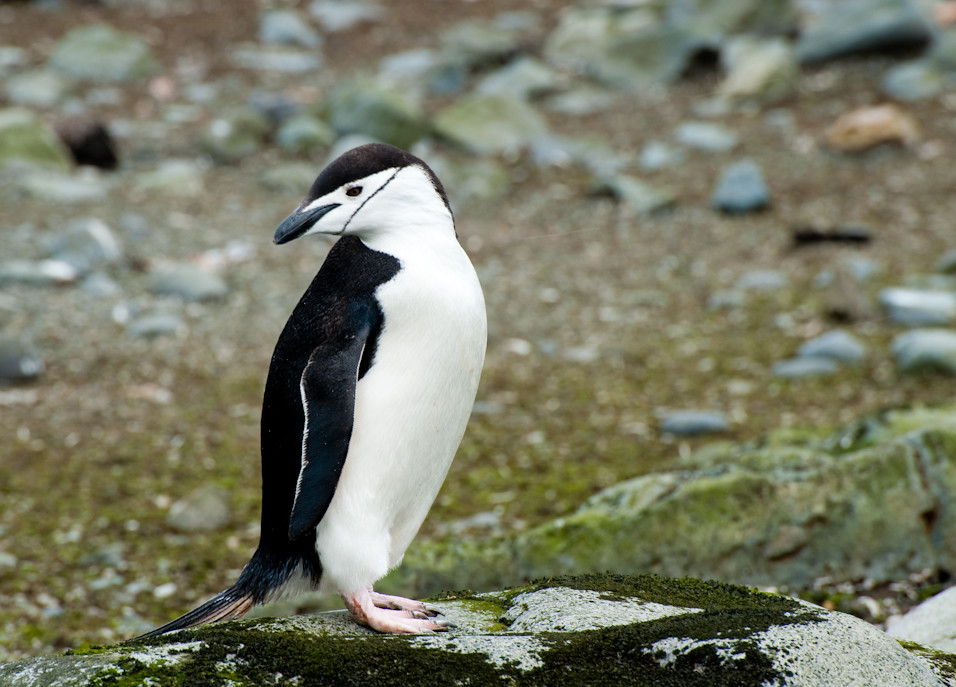 What's Black, White and Green... - A Chinstrap penguin resting on a lichen covered rock near King George Island in Antarctica. - Photo by Rachel Lea Fox
Comment on this photo

Coming back from a feeding foray, penguins will pop out from the water and straight on to their feet, surprising the unwary. Antarctic wildlife regulations dictate that humans shouldn't approach closer than 15 feet to a penguin, but if you're standing still and they approach you it's okay (unless they're clearly approaching you because they're trying to get someplace and you're in their way, in which case the penguin gets the right of way. After all, it's their road). Standing on the beach and having a penguin pop up beside you is a bit of a surprise, and almost as surprising is how little notice they take of people for the most part.

When a penguin pops out of the water, he'll frequently extend his wings and either flap or just stand there with wings extended. Unlike most times when the underside of the wing is white, when they're coming back from a stint of feeding the underwing will be much pinker. Despite swimming through freezing water (often literally), the penguins generate a lot of heat, and the blood vessels under their wings are close to the skin surface, so the wings are used like heat radiators to cool the bird down. After all, it's not easy to eat for three! 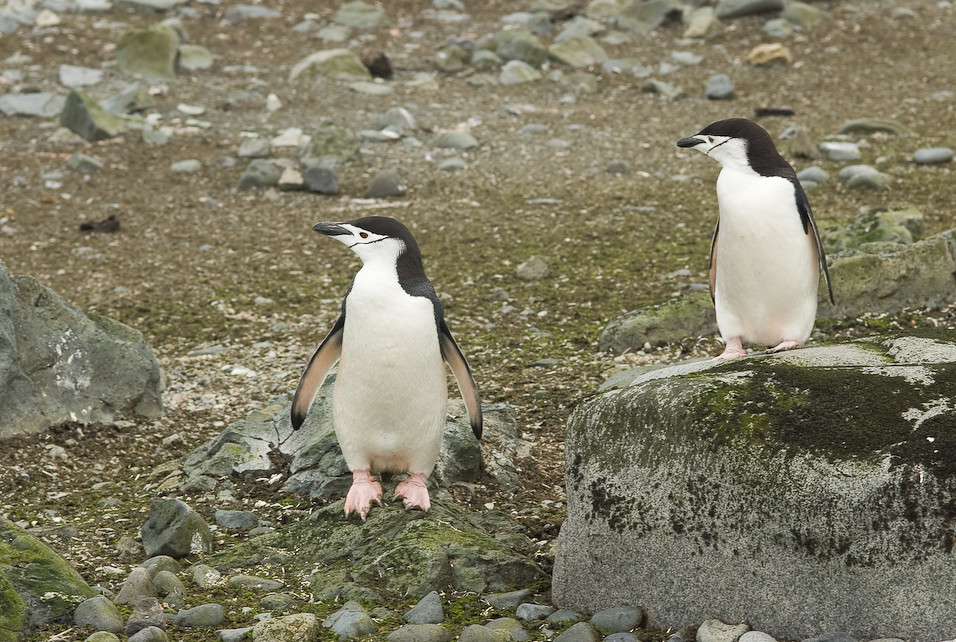 Beach Bathing - These two Chinstrap penguins are cooling off on this rocky beach. The light pink under the flippers shows that the penguin is warm still from swimming long distances. They will sit and rest till their flippers are cooler and return to white. Often the flippers can be seen as a dark pink almost red when the penguin has just come out of the water. - Photo by Kevin Fox
Comment on this photo

Returning Home - A Gentoo penguin returning home from swimming and fishing. Likely off now to feed its chicks. - Photo by Kevin Fox
Comment on this photo 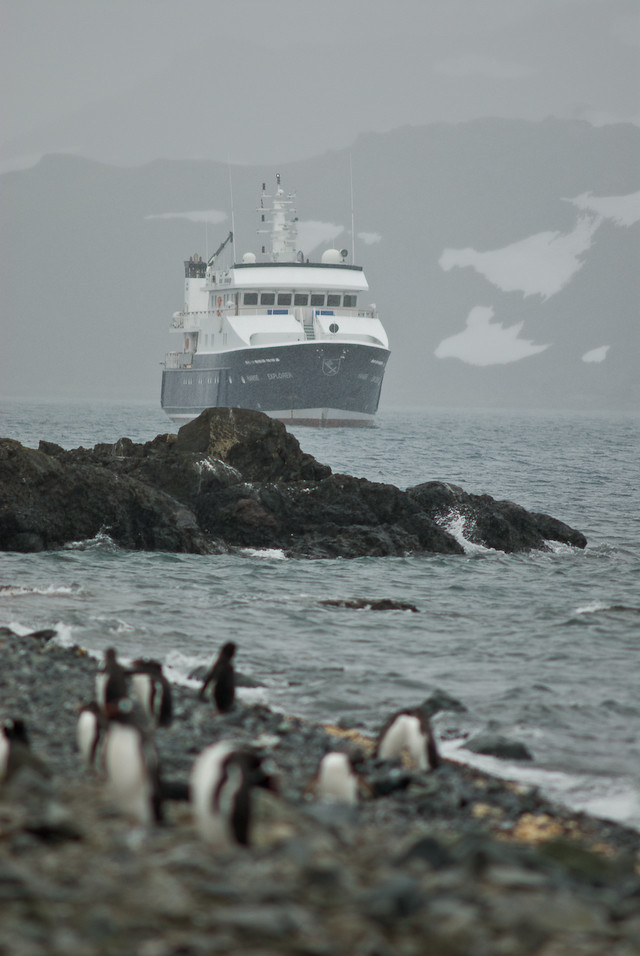 Penguin Beach - Our Hanse Explorer off in the distance from the penguin beach we are exploring. - Photo by Kevin Fox
Comment on this photo 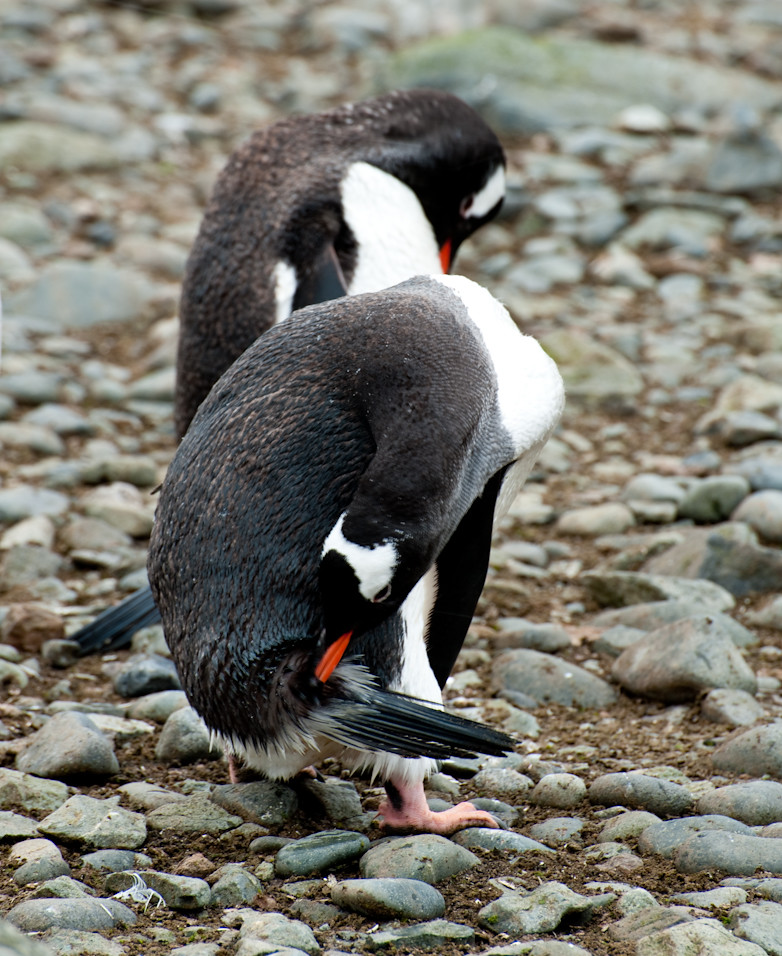 Bath Time - There is a gland in a brush tailed penguins tail that creates oil to help keep a penguins feathers waterproof. This penguin is getting some oil on its beak that it will then spread around on its feathers. - Photo by Rachel Lea Fox
Read 1 comment 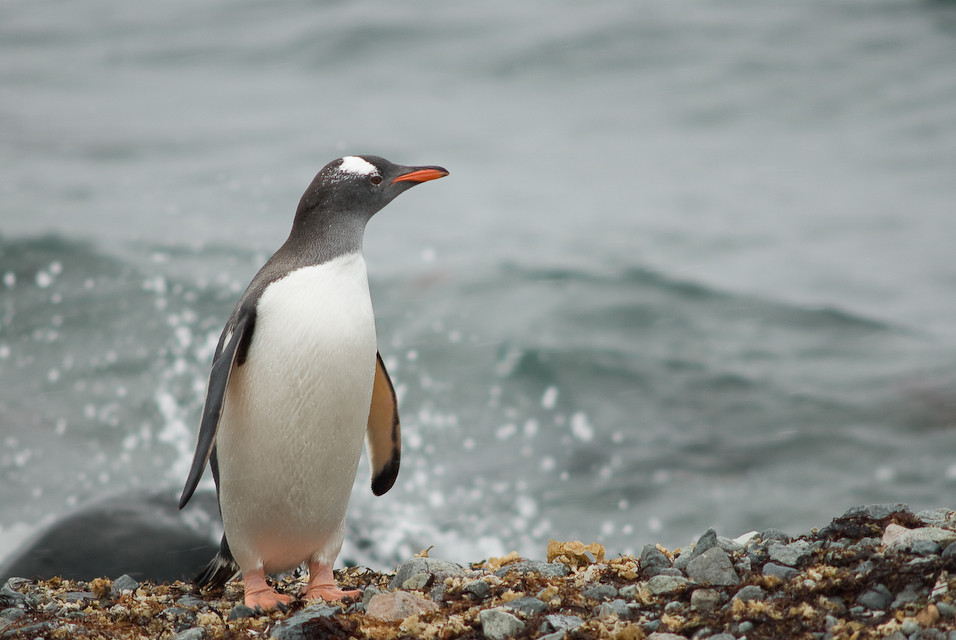 Splish Splash - A Gentoo penguin checking out the visitors to its beach. What is this place coming too? - Photo by Kevin Fox
Comment on this photo 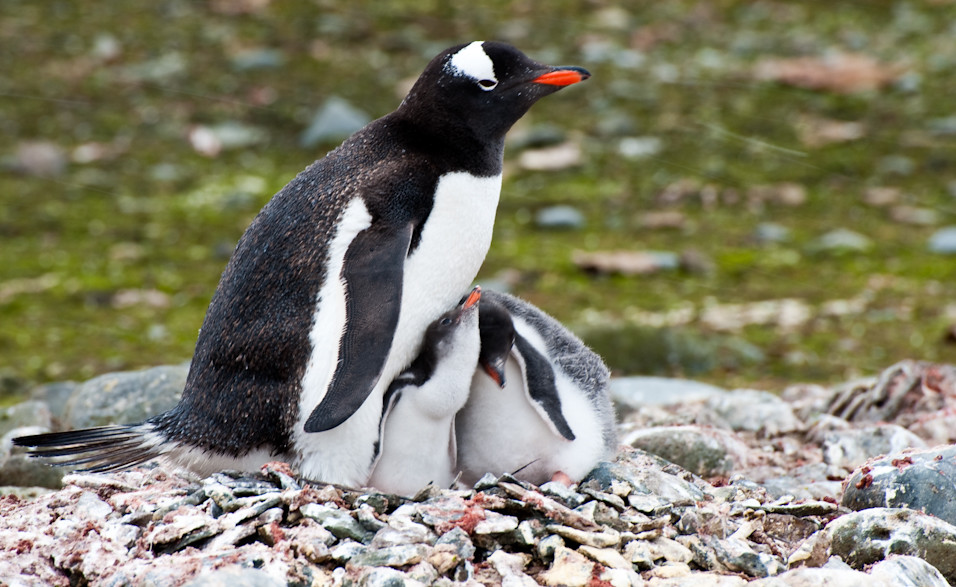 Looking Up to Mom - A Gentoo penguin's nest. This penguin has recently come back from fishing (you can still see the water in its feathers) and the baby is anxious to be fed. It looks like big brother may already have been fed. - Photo by Rachel Lea Fox
Read 2 comments

Home Sweet Penguin - A little family of penguins near King George Island, Antarctica. Its likely one parent just came back from fishing and has just traded places with its mate to care for its two growing chicks. - Photo by Rachel Lea Fox
Comment on this photo 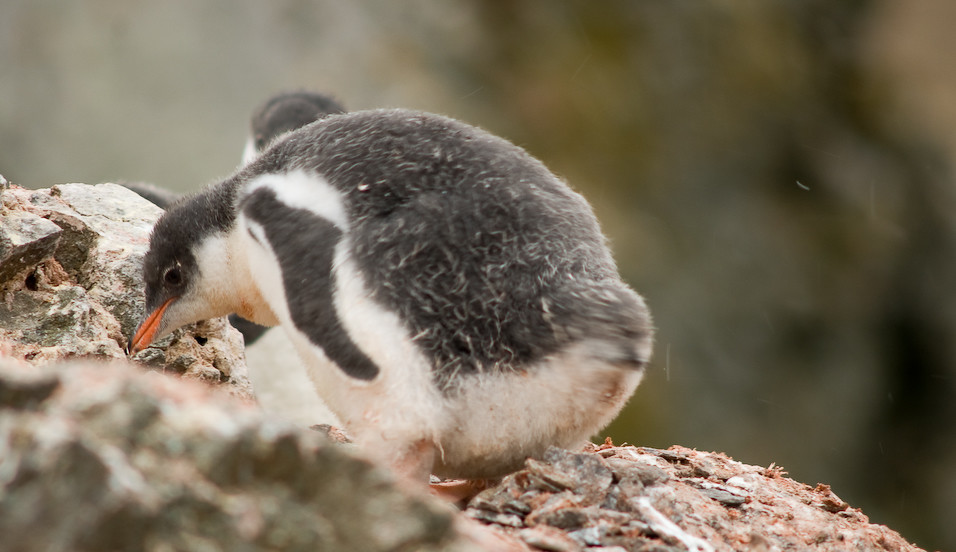 Chick Chick Here - A baby Gentoo poking at the pebbles. - Photo by Kevin Fox
Comment on this photo 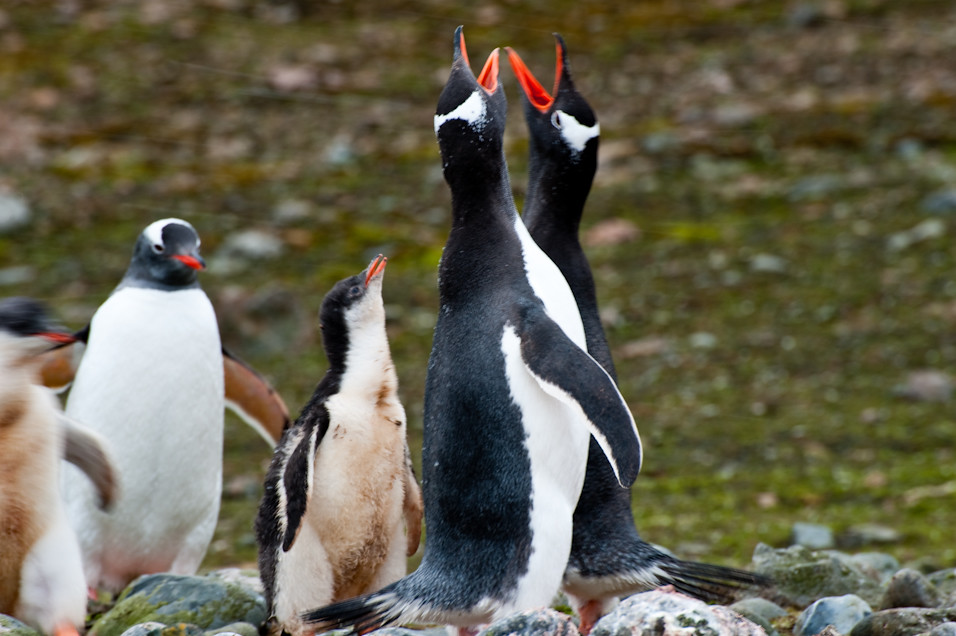 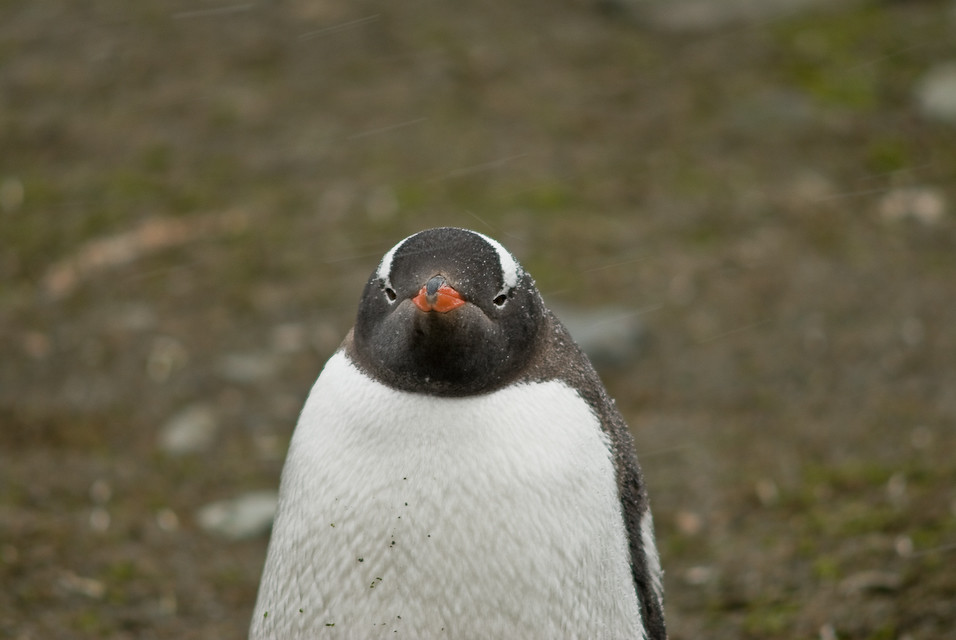 What You Lookin' At? - Wha'choo lookin' at? - Photo by Kevin Fox
Read 1 comment 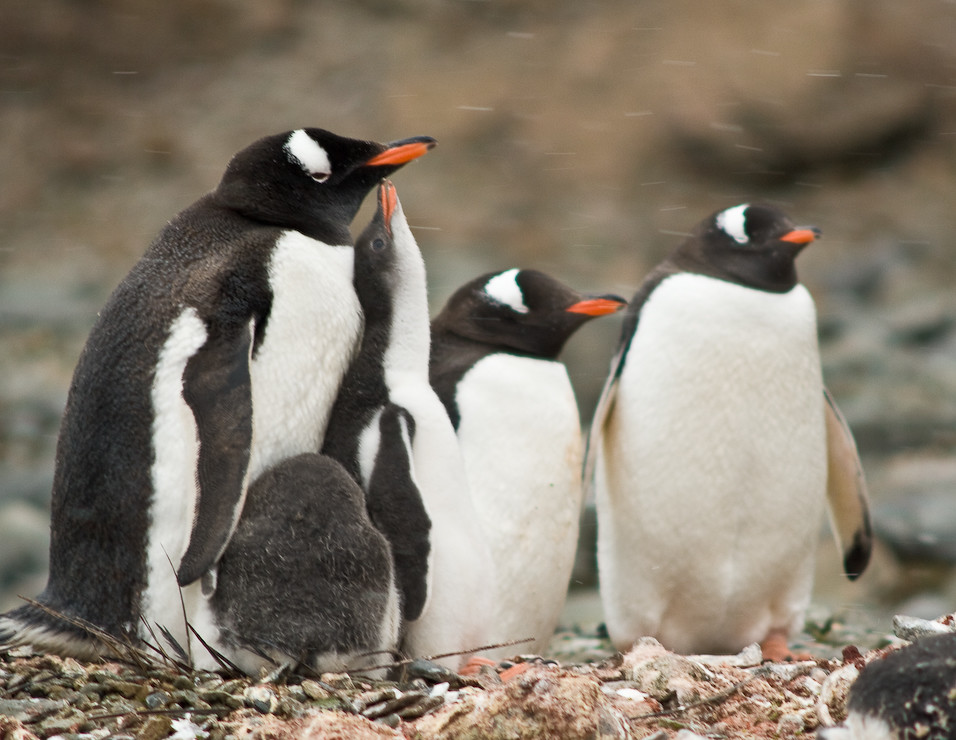 Feed Me Feed Me - "These darn checks are always hungry!" A slightly annoyed Gentoo parent and its persistent chick. - Photo by Kevin Fox
Comment on this photo 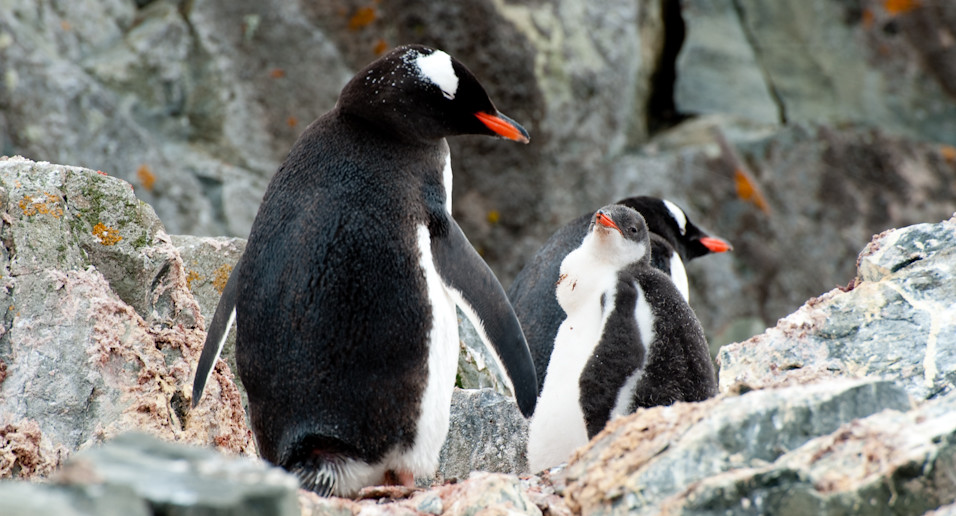 My Mini Me - with fluff - I love how fluffy and mini sized the chicks are. I say this about most all baby animals though. Too cute!! These are Gentoo penguins near King George Island, Antarctica. - Photo by Rachel Lea Fox
Read 2 comments 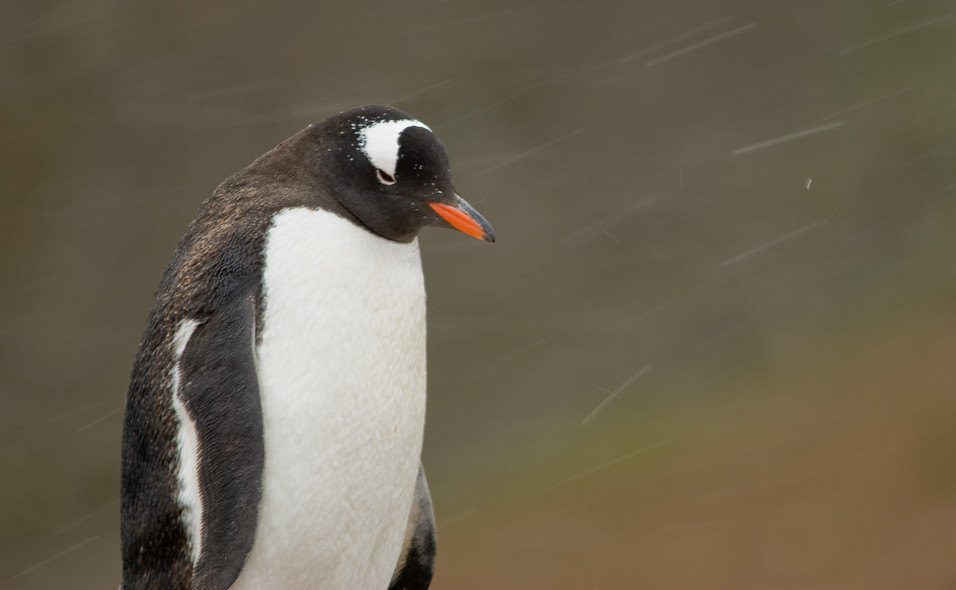 Snowy Days - Another snowy day on the beach for this Gentoo penguin. - Photo by Kevin Fox
Read 1 comment

All-told we spent about an hour walking the beach alongside the colony. It was a great taste of things to come, and an excellent run-through for how to handle our equipment and ourselves in this environment. After we got back, we got a full ship's tour, safety briefings, a wonderful dinner, and an early bed. Good thing, too, as we were going to need as much time to try and sleep as possible.

Read the next chapter: Day 2: Chicken