WARNING - Some of the photos in this post are very graphic. If you would rather not see the Antarctic Food Chain in action we suggest you skip this post.

After leaving our Gentoo and Adelie penguin friends on Petermann Island, we proceeded to the Penola Straight for some afternoon kayaking. We had three inflatable double Kayaks to share among the twelve of us, so we split into two groups, and Kevin and I were in the second group of kayakers. Rob and Tim took the zodiacs loaded with the first group of kayakers to a landing spot to get situated on the kayaks, and Rob came back in one zodiac to take us second-shifters for a zodiac cruise while we waited our turn.

We were ready to go and waiting on the back of the ship when Rob came zooming up in the zodiac, very excited. On his way back he had seen a leopard seal eating his kill and he wanted to get us there quickly so maybe we could catch it. We loaded in and off we went to see if there was any action, something we were both excited and sad about.

We came in close to the shore near a gentoo colony and found the leopard seal nearby, but he seemed to be done with whatever kill he had previously caught and was just swimming around. Rob told us that a leopard seal can take down 3 to 5 penguins for one meal so we should hang out and watch for a while.

As we waited, we watched the penguins on the shore. A big survival mechanism most penguins share is to approach the water in a group and jump in together, to provide a more confusing target for predators, and to not be isolated. We watched a group of about ten gentoo penguins approach the water's edge, hovering on the brink, nobody wanting to be first because of the possibility that they'll be the only one to jump. After several false starts by the ones on the edge, a few dive in at once, and several more quickly follow.

Near the end of the line, the last four penguins suddenly stop, turn around, and ran back up the rocks. The five of us in the zodiac laughed and made jokes about the 'scardy-cat penguins'.

Seconds later we saw the leopard seal burst from the water with a penguin in his mouth. One of the penguins that just moments ago we were watching and cheering on into the water. We all shut up fast.

Watching the feeding process was both mesmerizing and horrifying, not just to us but also to the penguins who sat on the rocks and watched along with us. It was pretty clear they knew just how close a call they just had.

We were told that leopard seals are like cats in that they play with their prey before eating it, and we witnessed it to be true. The leopard would release the partially stunned penguin, then grab it again when it would start moving, toying with the poor penguin. Eventually though, he got down to business.

We floated along in the area for the next 25 minutes watching the entire process as the leopard seal skinned, de-feathered and ate the kill.

Back at the gentoo colony, life goes on. More penguins were queuing up to jump in to the water, and somewhere amidst the nests there was a penguin whose mate wouldn't be coming back and who would in a matter of days have to abandon the chicks, unable to protect and feed them alone.

Nobody said living in the Antarctic was easy, even (especially) for a penguin. 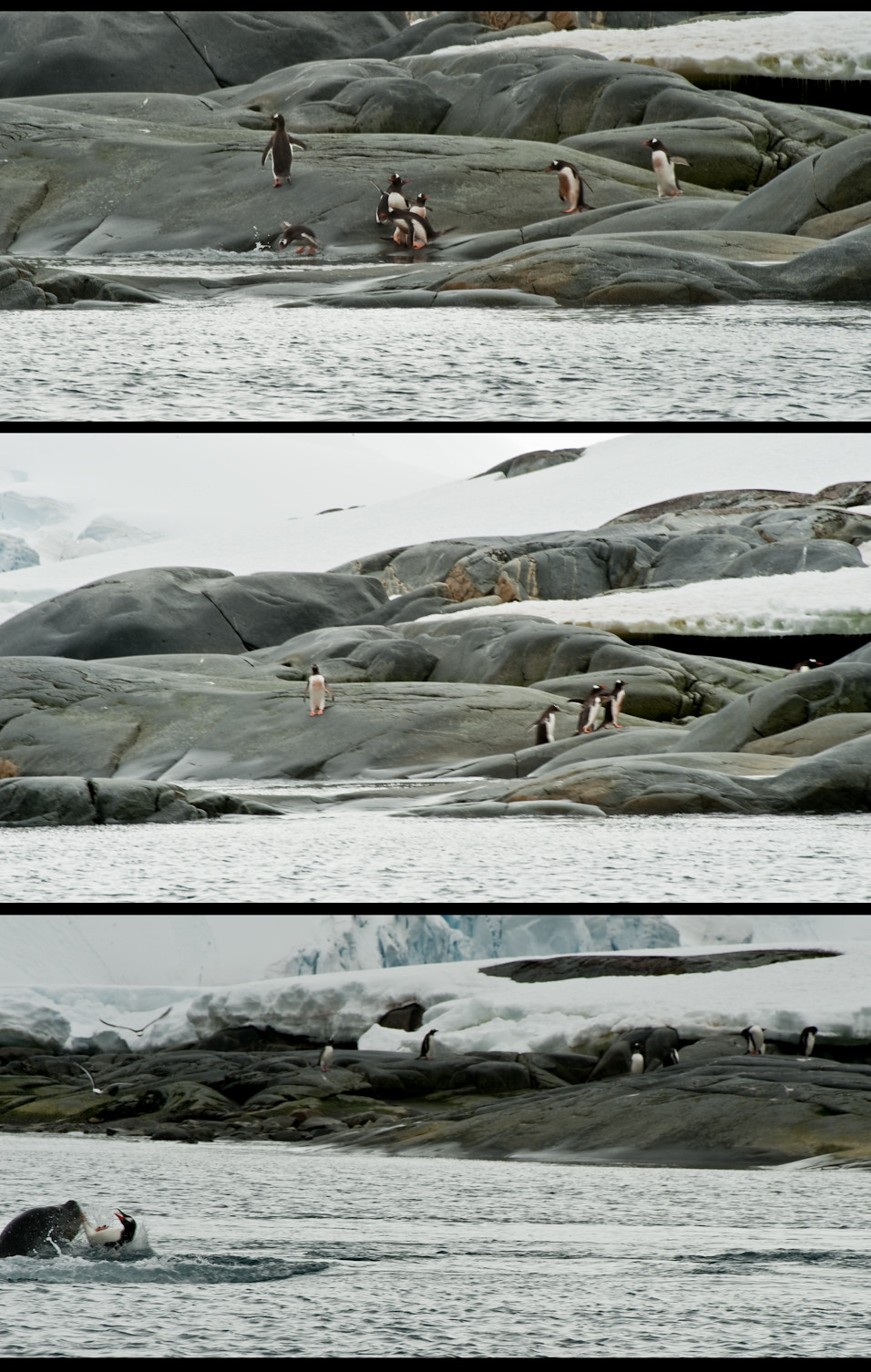 The Take Down - We had the amazing experience today. We actually saw something you only see on national geographic. Knew there was a leopard seal in the area and that he had eaten recently. We were just watching the area to see what he might do next, somehow I didn't really expect much, and it wasn't something I was actively seeking out either. In any case as we watched the area we saw a group of gentoo penguins approach the water in a group, which they do for safety. A bunch jumped in and then a few at the back turned and scurried back up the rocks. We were actually all teasing, saying they were scardy-cats and such. Then we saw the leopard seal jump and the penguin go with him. I couldn't believe it. It was both horrifying and mesmerizing. The same was true for the penguins who actually also sat transfixed watching what was happening on the shore. - Photo by Rachel Lea Fox
Read 1 comment 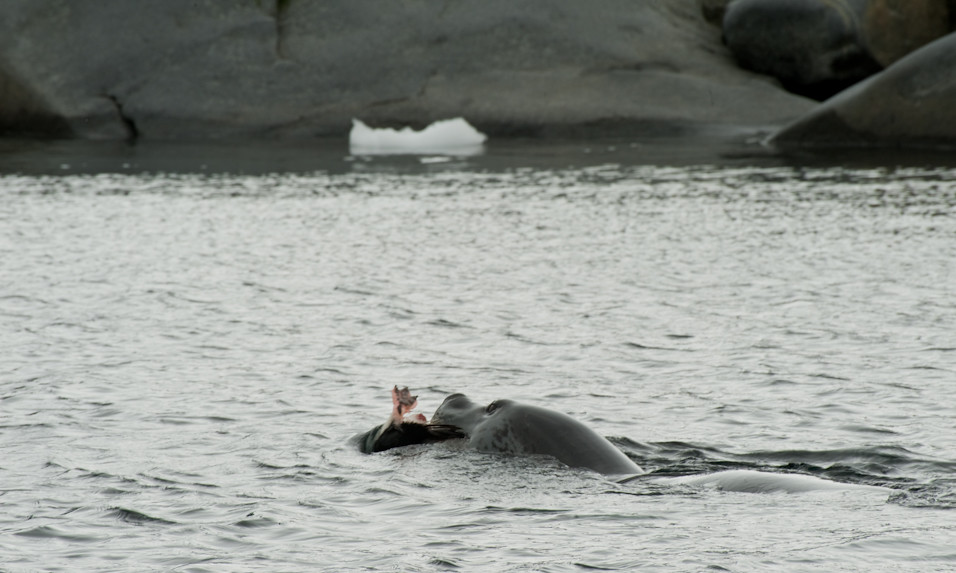 By The Foot - Leopard seal with his penguin kill. - Photo by Rachel Lea Fox
Comment on this photo 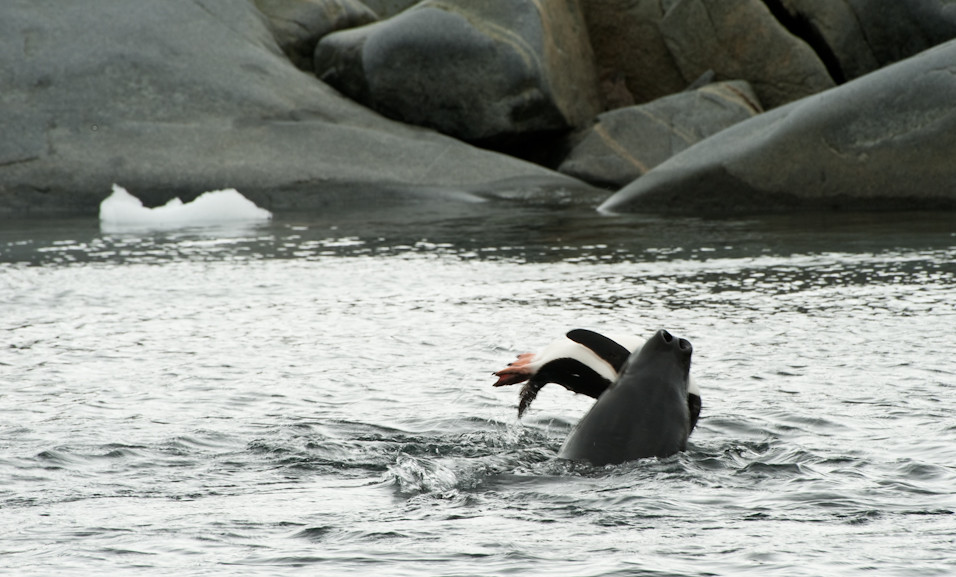 Gotcha - Rob told us they don't normally hold them by the neck like this, but rather by the feet. - Photo by Rachel Lea Fox
Comment on this photo

I Eatcha with Ketchup - Leopard seal with his penguin catch. This was both amazing and horrifying to watch. - Photo by Rachel Lea Fox
Read 1 comment 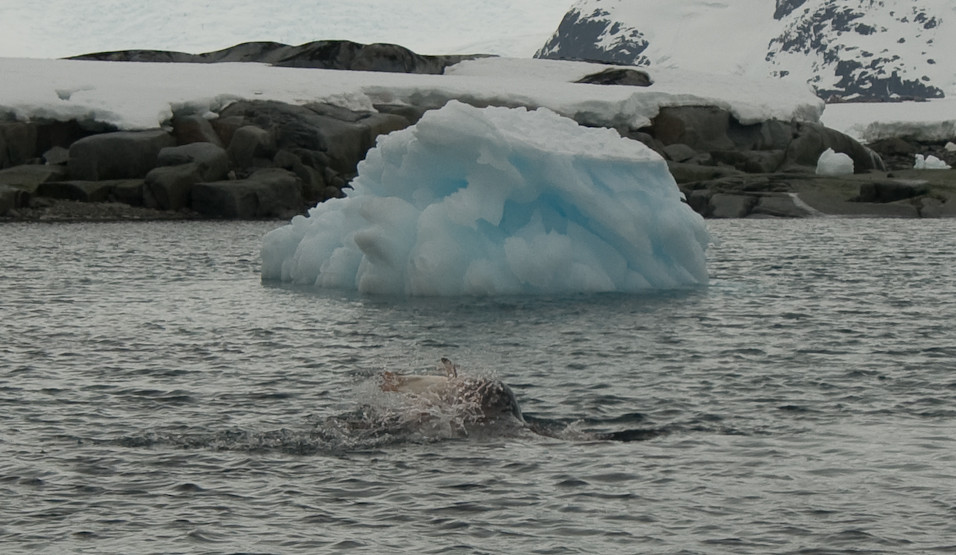 Swing Batter Batter - A leopard seal swings its prey and slaps it on the water to break the skin and feathers away from the meat before it eats it. - Photo by Kevin Fox
Comment on this photo 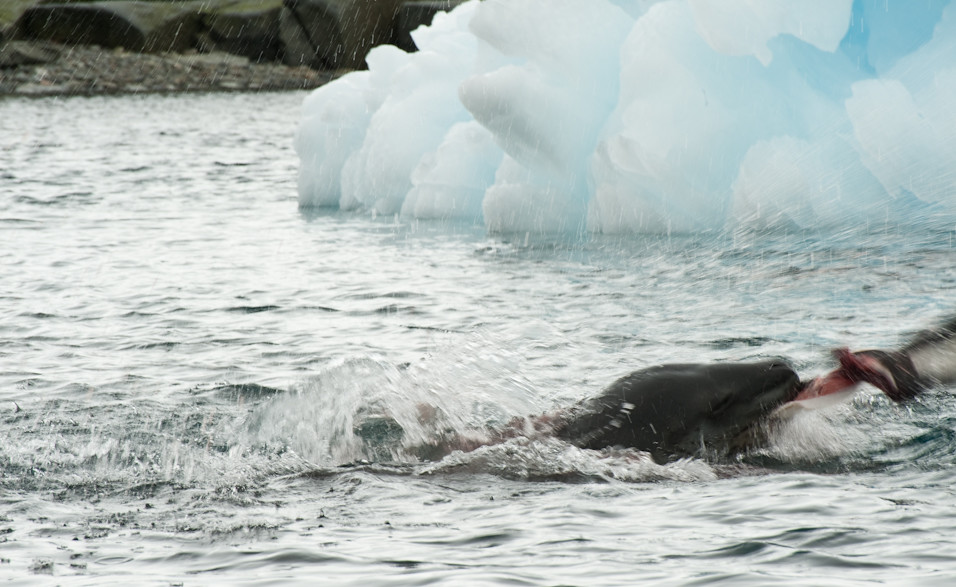 Swish - To de-feather the penguin, leopard seals will beat the carcass against the water so that the feathers and skill will peal away. This was about a 20 minute process that was mesmerizing and horrifying. - Photo by Rachel Lea Fox
Comment on this photo 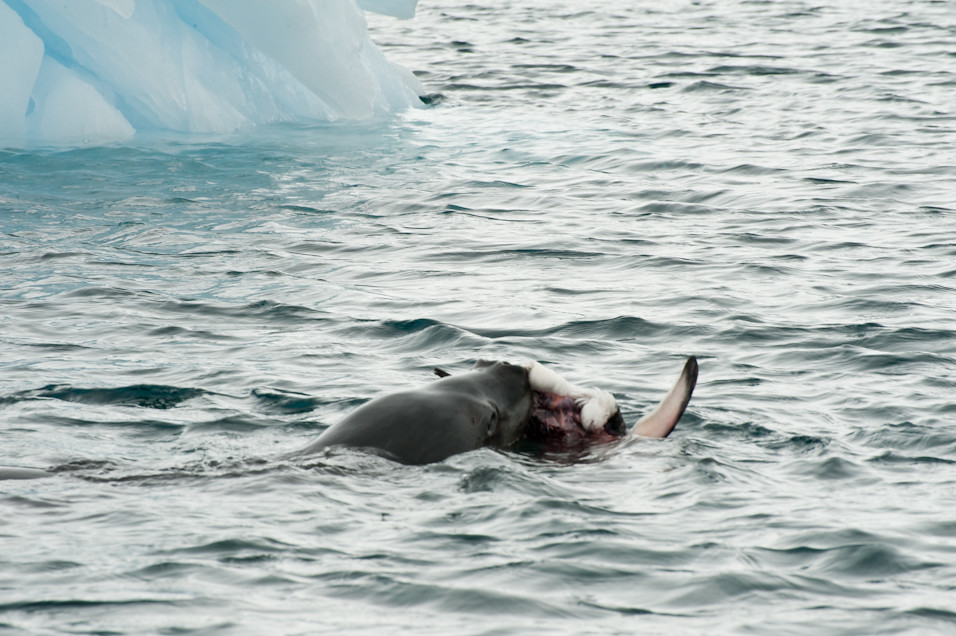 Snack Time - You can see how he has pealed away the skin and feathers to expose meat that he can eat. - Photo by Rachel Lea Fox
Comment on this photo 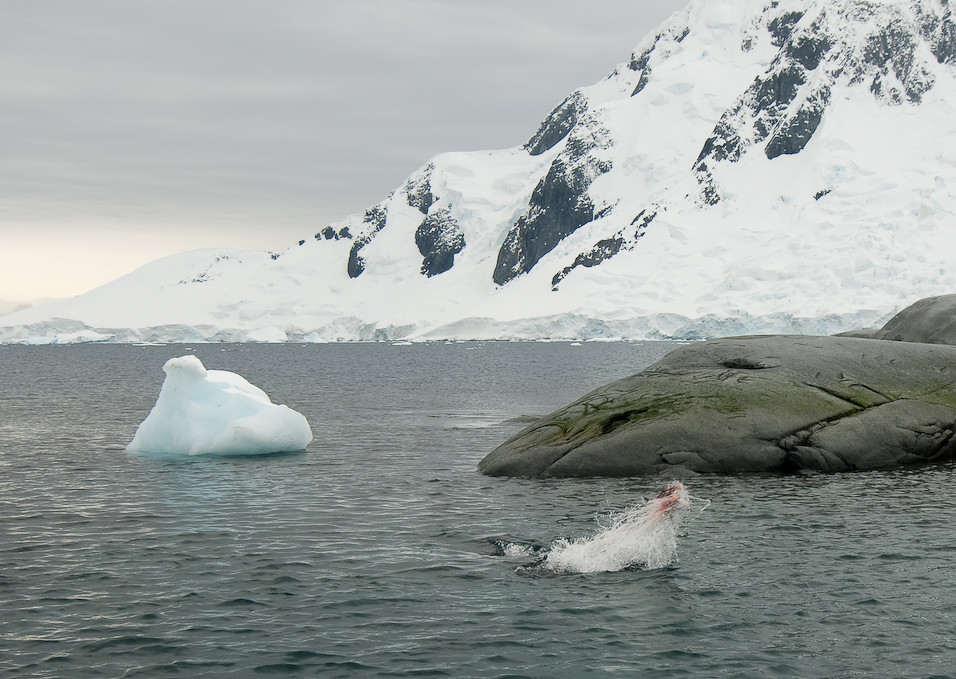 Flying Penguin - The carcass of a penguin flying out of the water as a leopard seal swings it around and slaps it against the water to skin it. - Photo by Kevin Fox
Comment on this photo 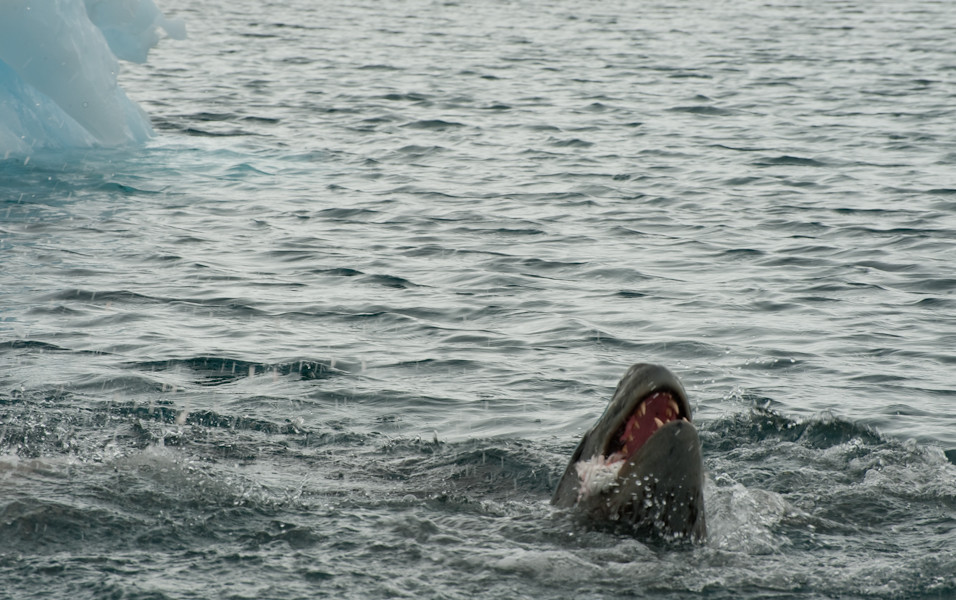 Something Is Stuck In My Teeth - Leopard seal with a bit of skin and feather stuck in his mouth as he works on eating his lunch penguin. We were able to float so close to this taking place. I couldn't believe what I was seeing most of the time. It was seriously just amazing to watch in a very scary and horrible sort of way. - Photo by Rachel Lea Fox
Comment on this photo 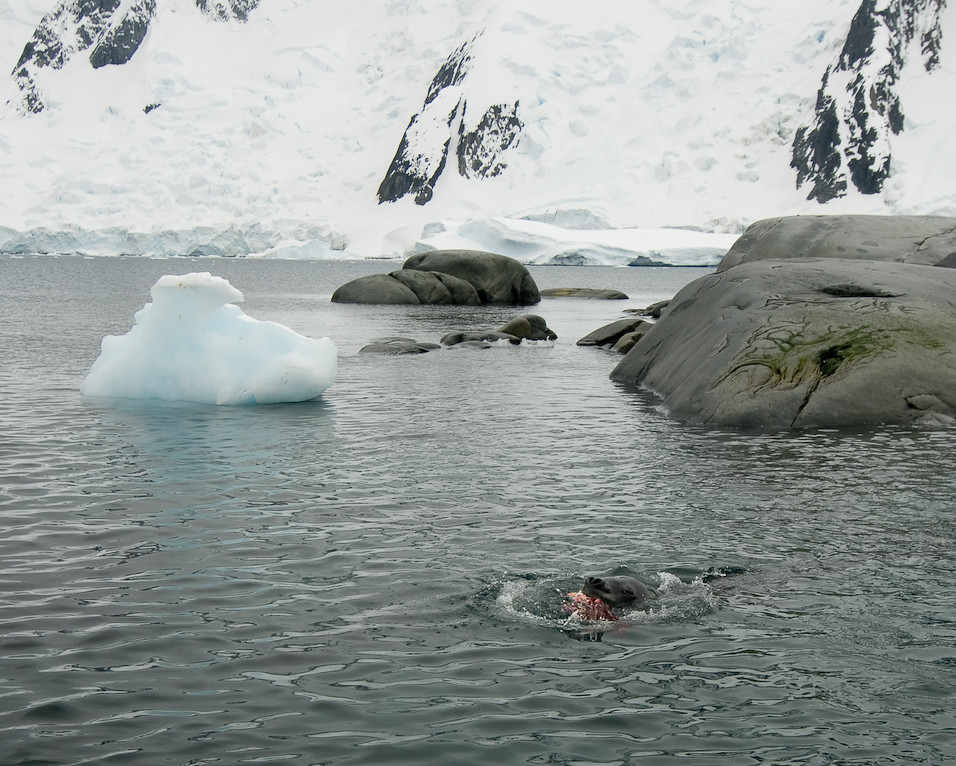 Look What I've Got - Sometimes it seemed as though this leopard seal was parading with its kill, showing off what it had, much like a cat might. Rob our naturalist told us a leopard seal will sometimes gift a meal to a group of humans much like a cat brings a mouse to its human. It has also been known that a fleeing penguin will pop out of the water right into a spectating zodiac where the leopard seal has a much hard time getting it. - Photo by Kevin Fox
Comment on this photo 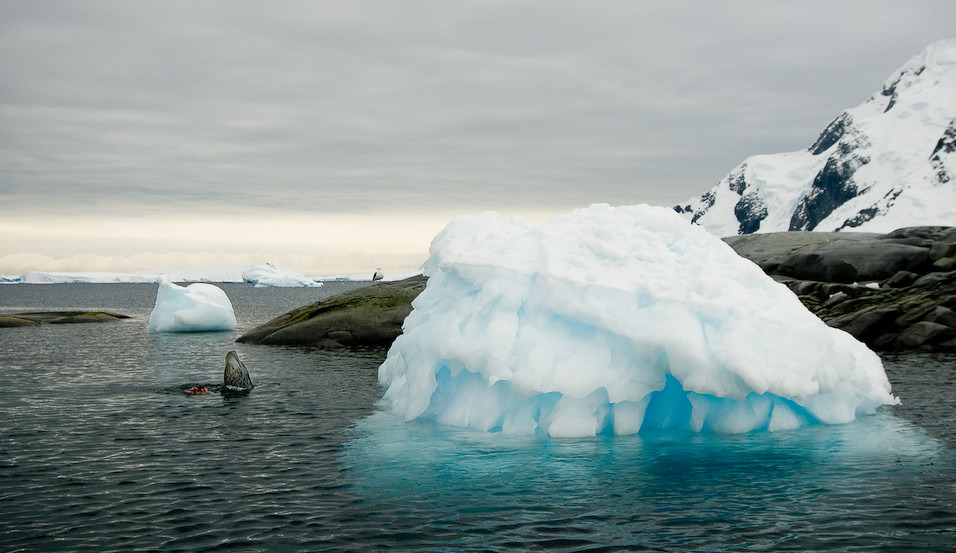 Roar - We saw the leopard seal stretch its head in the air like this frequently during the 25 minute process of cleaning and eating its prey. It almost seemed it was roaring with triumph. - Photo by Kevin Fox
Comment on this photo 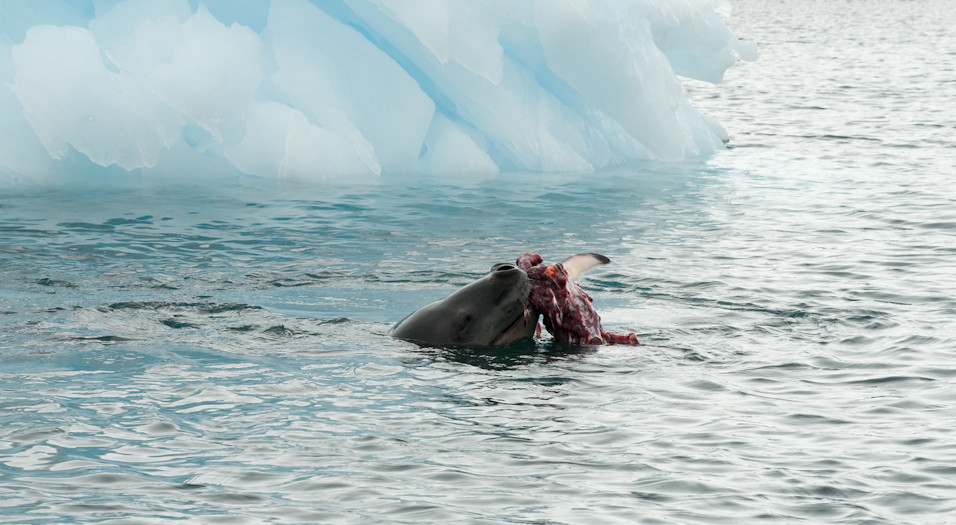 The Prize - The leopard seal has successfully skinned and de-feathered his penguin so he can happily eat his lunch. - Photo by Rachel Lea Fox
Read 1 comment 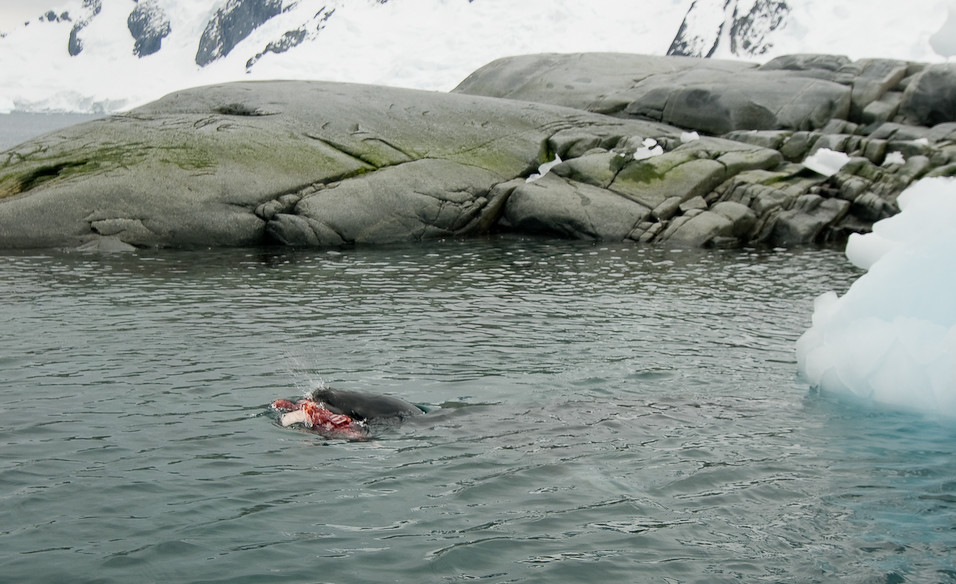 Dinner - Leopard seal carrying its skinned dinner in its mouth. - Photo by Kevin Fox
Comment on this photo

Savoring The Kill - Leopard seal enjoying his lunch of penguin which he worked very hard for. - Photo by Rachel Lea Fox
Comment on this photo 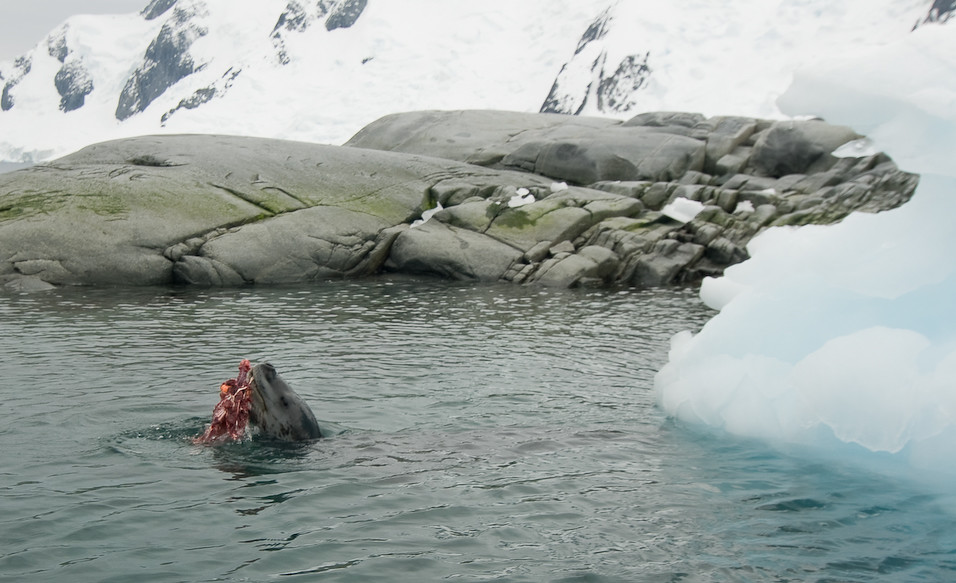 Don't worry though. Antarctica isn't all about penguins and death. Sometimes (like later this evening) it's about Ukrainian vodka and brassieres...

Read the next chapter: Day 4: Kayak