Antarctic Fox
The log of Rachel and Kevin Fox's trip to the Antarctic Peninsula in the Summer of 2008-9
Leaving, on a jet plane
December 23-25 - Van Nuys, California - San José, Costa Rica - Santiago, Chile

It was 8:30am and after an evening's rest we were up, re-packed, and my mom and sister dropped the two of us off at Van Nuys Airport for our charter. The private terminal at Clay Lacy vs the Southwest terminal at San Jose are a study in opposites. Clay Lacy is completely empty except for the receptionist. San Jose's Burger King line was 25 minutes long. Clay Lacy had little cookies and free wi-fi which I used to quickly grab the last episode of 'How I Met Your Mother - Season 2' off of iTunes.

Over the next thirty minutes our party arrived group by group, each arrival resulting in more smiles and hugs. And bags. We met the pilots on the tarmac, stowed all the bags in the aft, and took our seats for the journey. 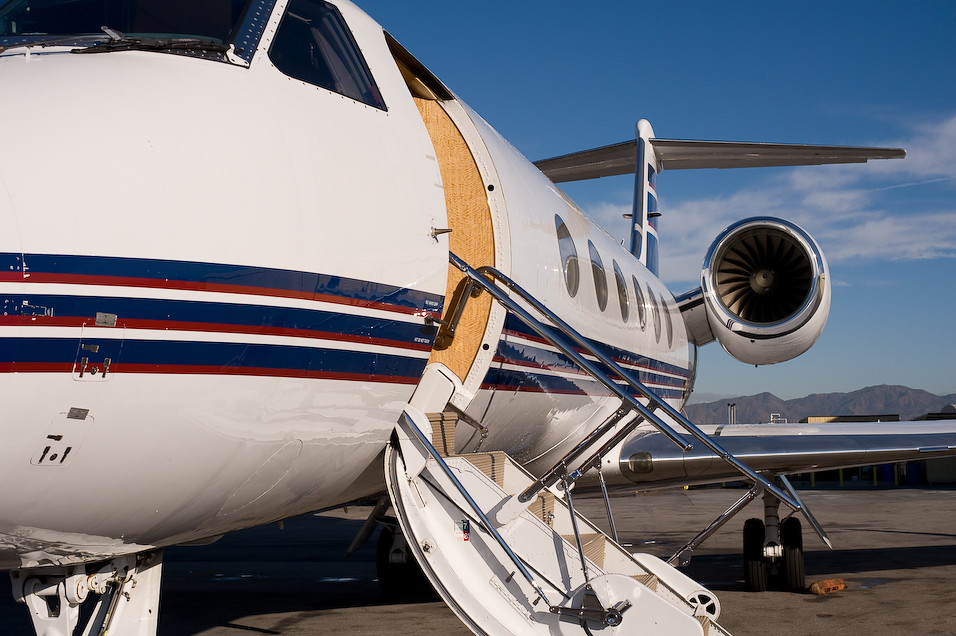 Our Ride - Our chariot awaits as we get ready to set out on the trip of a lifetime to Antarctica! - Photo by Kevin Fox
Comment on this photo 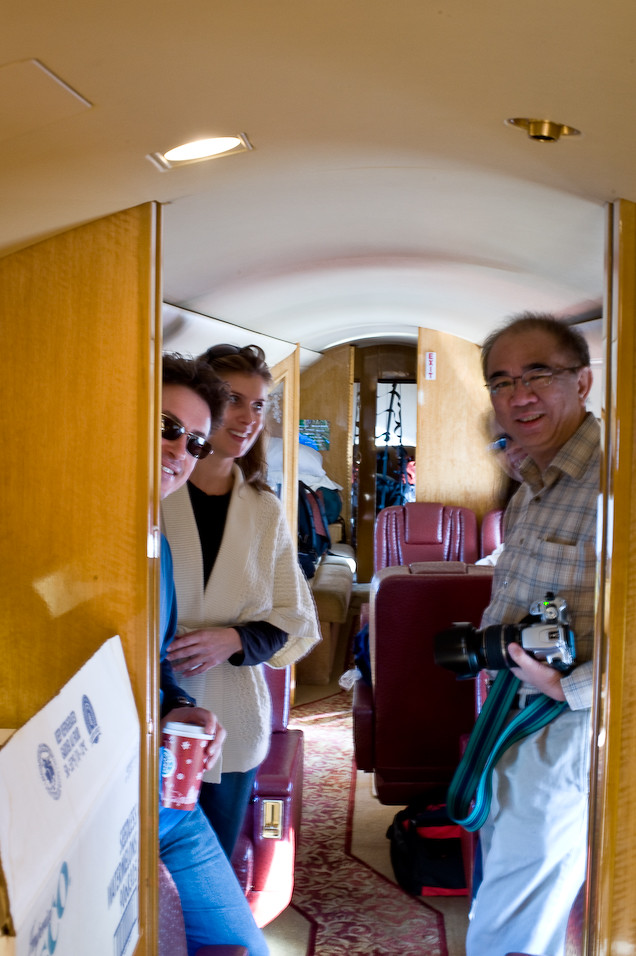 Happy Travelers - Our chariot (and Noah, Patrica and Peng) awaits as we get ready to set out on the trip of a lifetime to Antarctica! - Photo by Kevin Fox
Comment on this photo

Our neighbor Cyrus has a travel philosophy, loosely paraphrased: Don't fret too much about packing, because anything beyond your passport and a credit card is a 'nice to have', but is not essential because anything that you need, you can get wherever you find yourself.

Antarctica is the exception to the rule. If you forgot it, you'll probably just have to do without it. This, coupled with the total unknown of what our day-to-day life would be resulted in Rachel and me packing enough DVDs and iTunes videos to last a two-week snow-in, and enough books downloaded into our Kindles to match [side note: I love my kindle so much. It's supplanted my iPod as my most-vital traveling gadget. Which books to bring? How about all of them?] Along with the urge to overpack came the necessity of keeping our checked bags under 20kg (44lbs) because of a weight restriction on one leg of the flight. After careful packing, pruning, and repacking, it turns out that my technology is roughly equal in weight to all my clothes, expedition and otherwise.

Meanwhile, back in the plane, we settled in for our six hour flight to Costa Rica. Our in-flight meal was composed of food that the group had picked up the evening before at Stanley's and Art's Deli. Bagels, matzo-ball soup, and chicken quesadilla. Sure beats dry-roasted peanuts. :-) 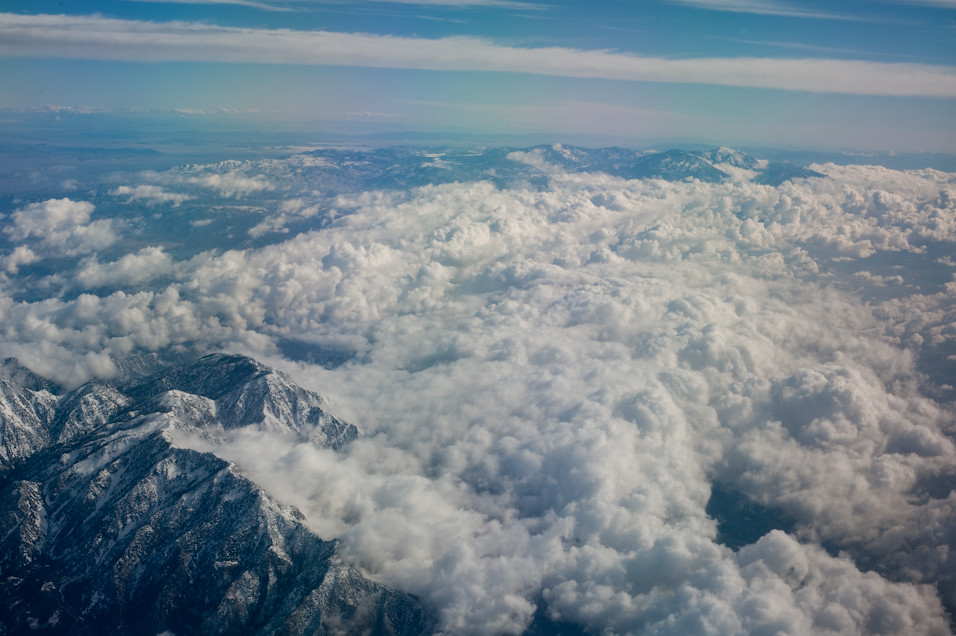 Leaving L.A. - Getting up to altitude as we leave Los Angeles, CA beginning our trip to Antarctica!! - Photo by Rachel Lea Fox
Comment on this photo 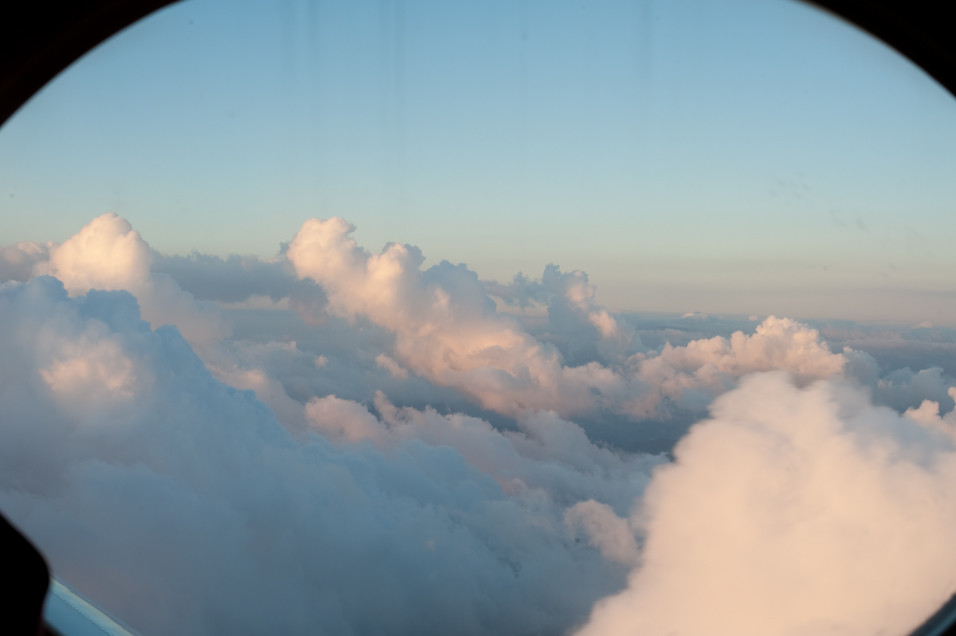 Maxfield Parish Clouds All Around Us - Clouds over California as we have taken off from LA and are heading toward our first refueling stop in San Jose, Costa Rica. - Photo by Rachel Lea Fox
Comment on this photo 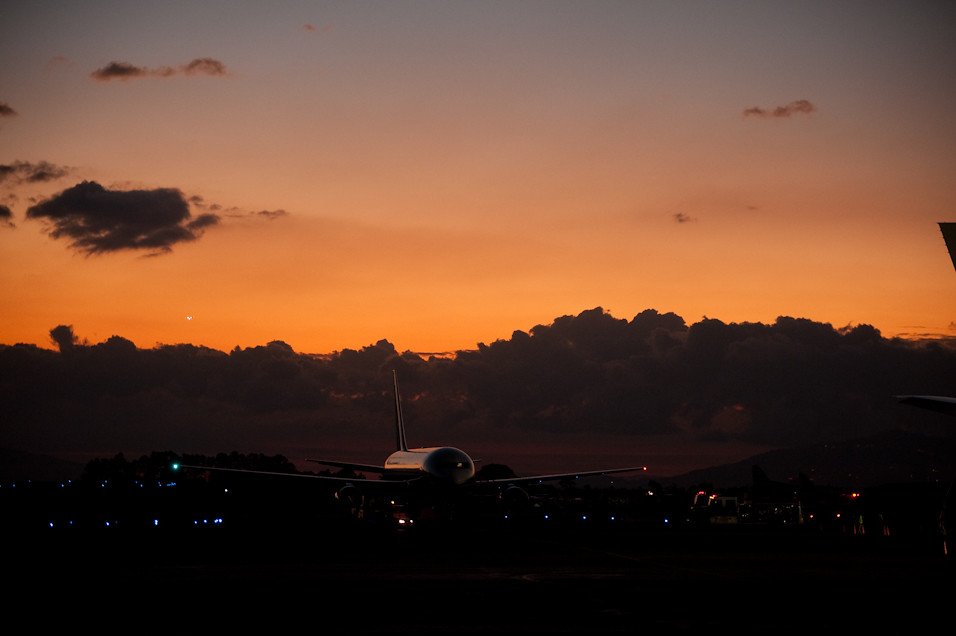 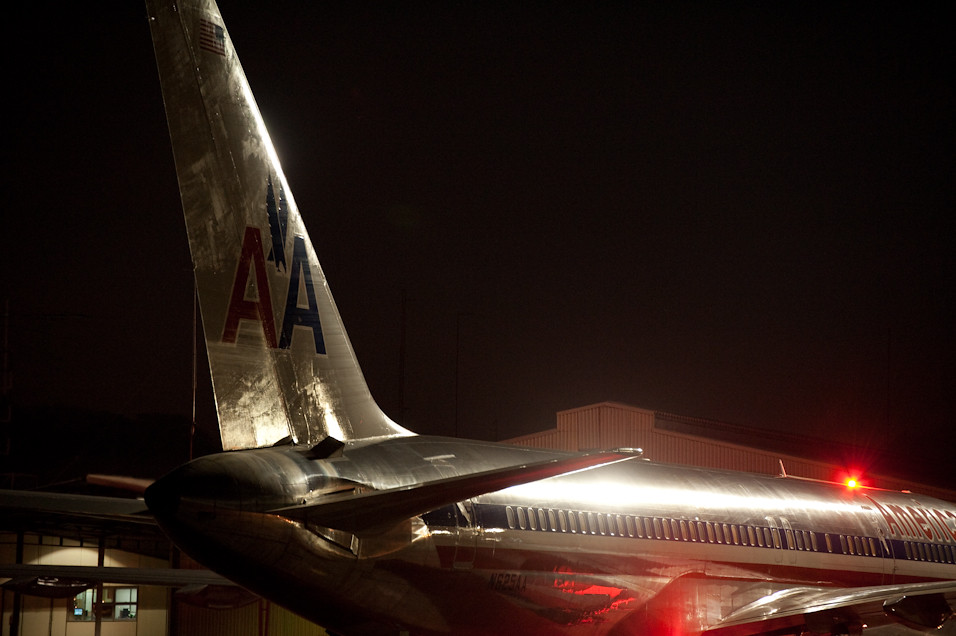 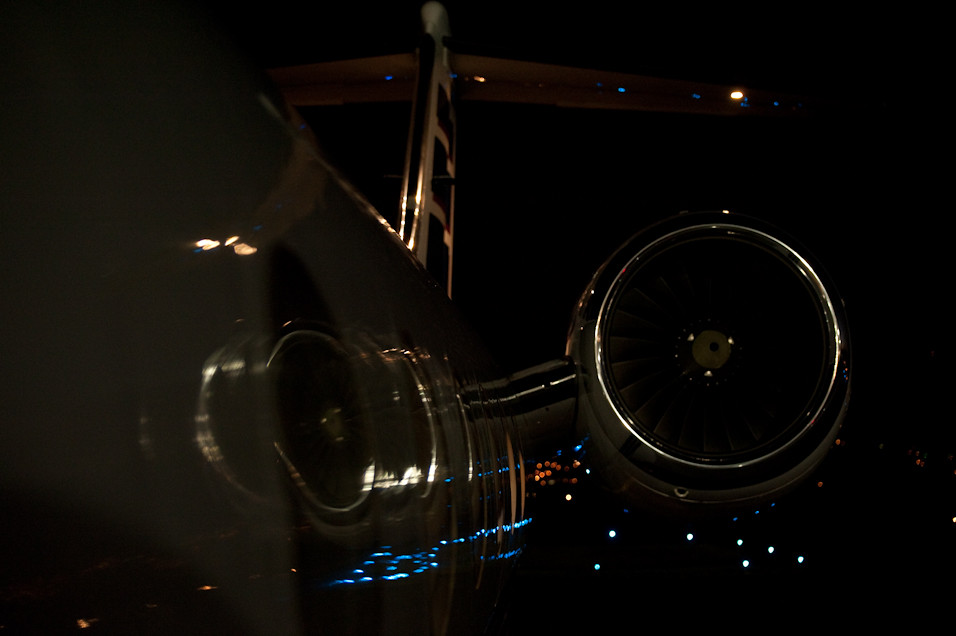 Glimmer - Nighttime reflections on the jet in San Jose, Costa Rica! - Photo by Rachel Lea Fox
Comment on this photo

Sunset as we landed just a few hours later for refueling in Costa Rica served both as a reminder of how far east we'd travelled and how short the days were in the Northern hemisphere. The sunset was beautiful and the air was tropical. We took a van from the tarmac to the main terminal for a chance to use real bathrooms and then it was back on the plane for the next hop: another six hour flight to Santiago, Chile.

Arriving in Santiago we spent 20 minutes being processed by a deserted customs center (the benefit of arriving at 4am) and we were off to the hotel where, in the face of a schizophrenic thermostat, we pretty much failed to sleep.

The next day (okay, later the same day, really) was Christmas Eve (Feliz Navidad!) and we had a great time meeting my cousin Ingrid's Chilean host family. Ingrid spent a quarter in Santiago as part of getting her degree in Spanish and came down a few weeks early to revisit with her Chilean family and friends before continuing on the trip.

After everyone else had wound down, Sara, Brian, Heather, Rachel and I went downstairs and had a fantastic Christmas Eve dinner at the hotel's restaurant. We amused ourselves a great deal with our own company. 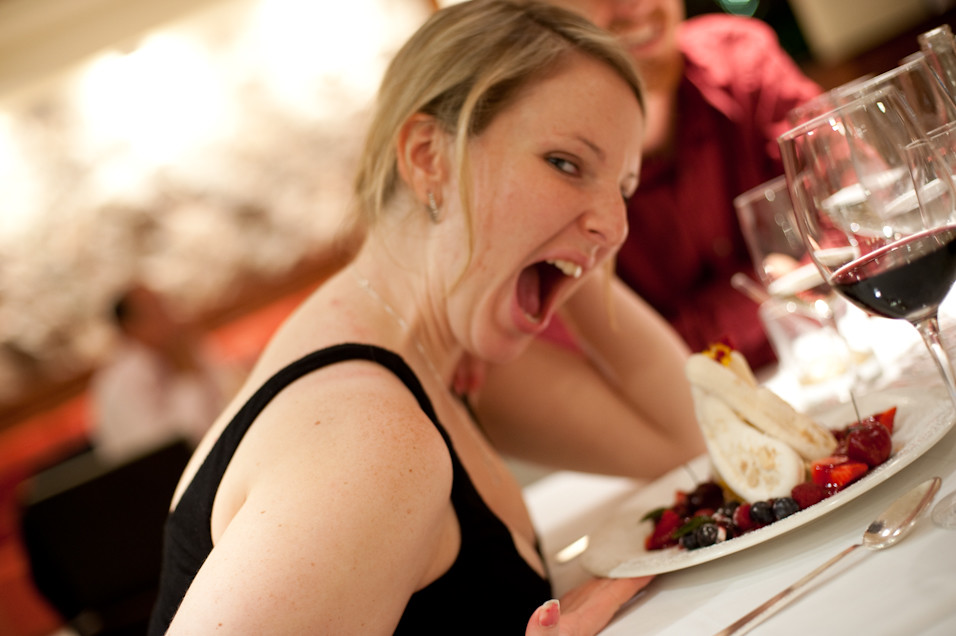 Digging In - Heather is ready to dive into her dessert at Christmas eve with Cousins dinner in Santiago Chile. - Photo by Rachel Lea Fox
Comment on this photo 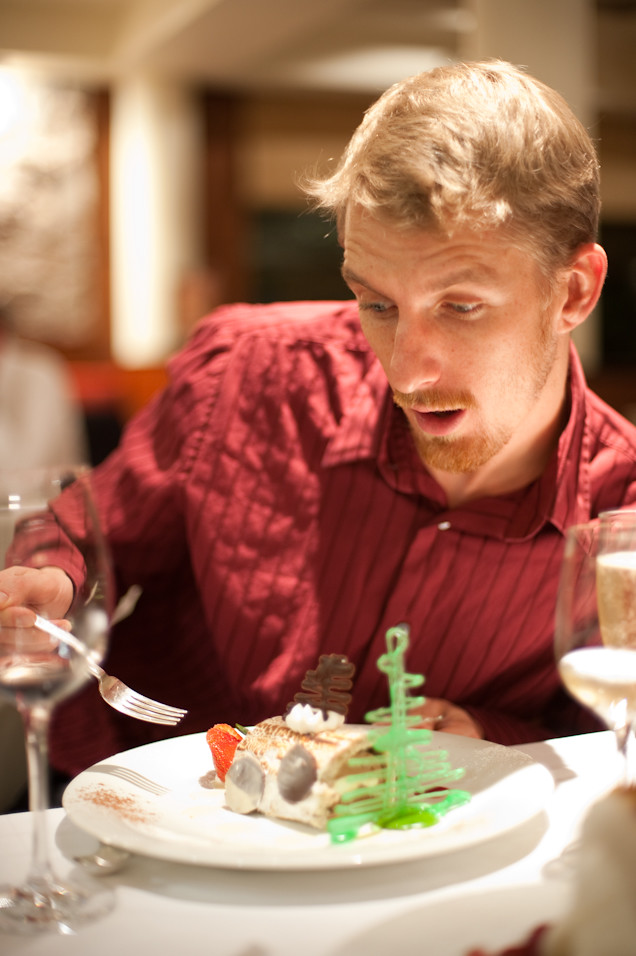 Overwhelming Dessert - Brian, daunted by this amazing dessert at Christmas eve with Cousins dinner in Santiago Chile! - Photo by Rachel Lea Fox
Comment on this photo 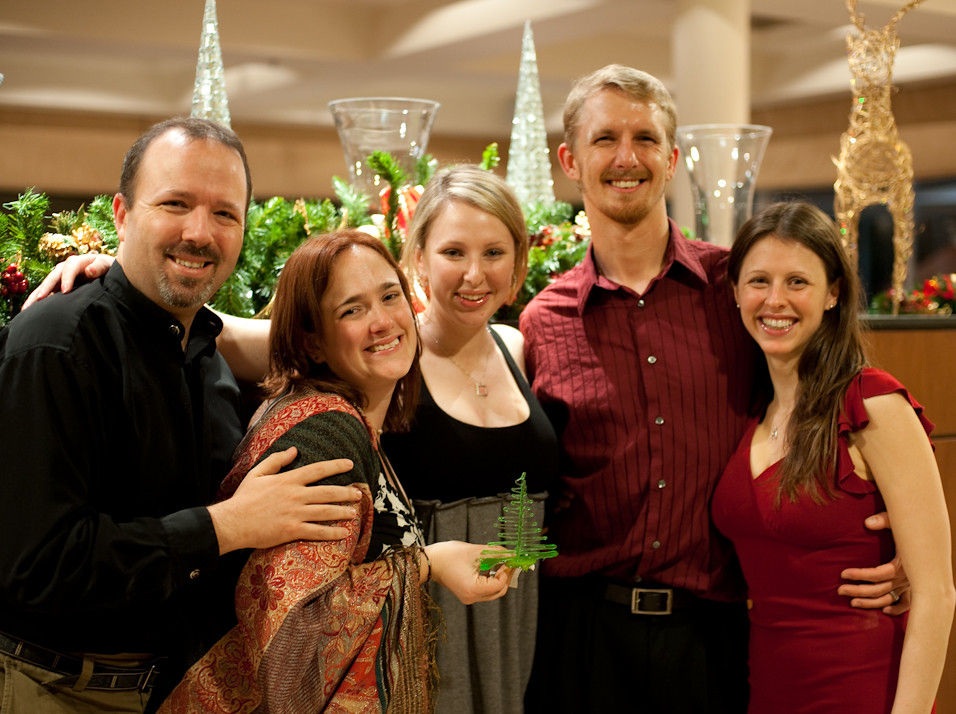 A beautiful, sunny 80 degree Christmas morning, and we had a few hours before we had to leave on the next leg of our journey to Punta Arenas, so after checking out of the hotel we spent a few hours getting a look at a beautiful — but very empty — Santiago. Word of caution: Starbucks in Chile don't serve Chai. :-) 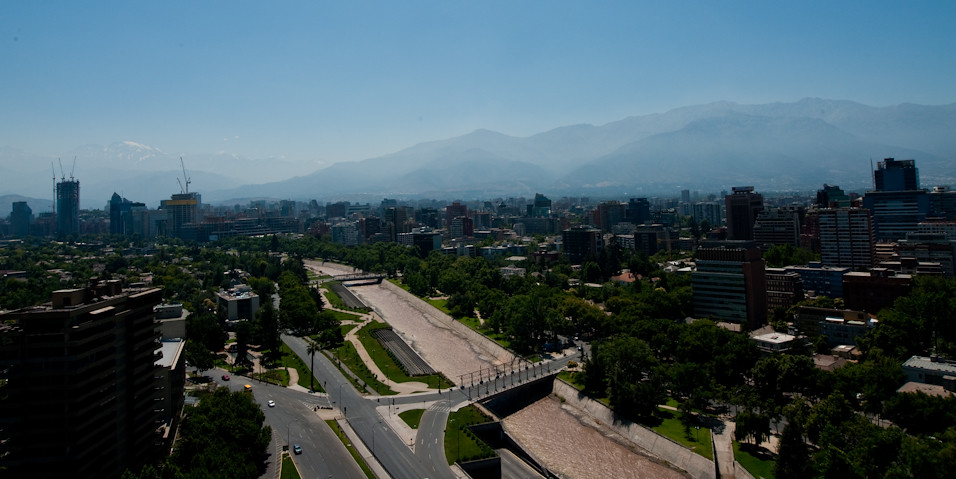 Santiago! - The view from an upper floor of our hotel in Santiago Chile. It was Christmas Eve and Christmas day when we were there so we didn't get to see very much, but the people were incredibly nice and the city was very cool. - Photo by Rachel Lea Fox
Comment on this photo 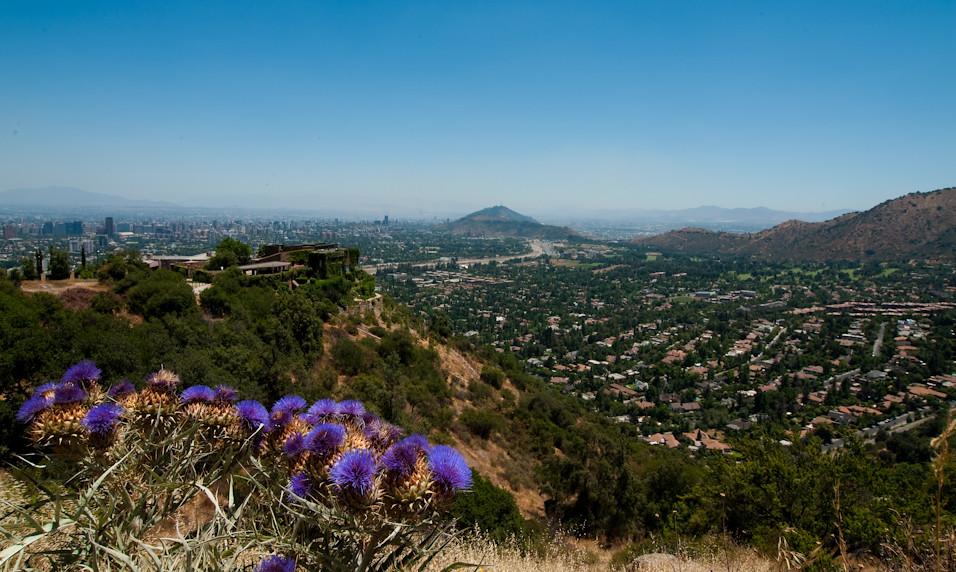 View of Santiago - Some of us took a driving tour around Santiago to see the sites before we left. It was Christmas day so most things were closed but this view was gorgeous! - Photo by Rachel Lea Fox
Comment on this photo

Santiago Site Seeing - Some of us took a driving tour around Santiago to see the sites before we left. It was Christmas day so most things were closed but this view was gorgeous! [Ingrid, Heather, Noah, Patrica, Kevin, Rachel (me), Brian, Sara, Paulyn, Peng] - taken by our guide. - Photo by Rachel Lea Fox
Comment on this photo 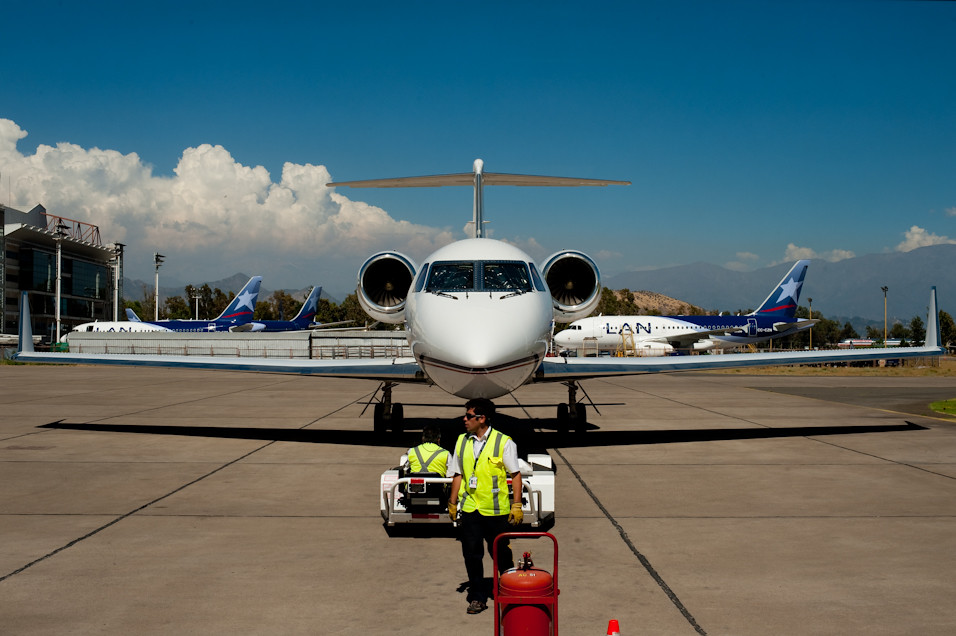 Ready for Take Off - Our ride is ready, refueled and the pilots are rested. We should be ready to leave Santiago, Chile and head out to Punta Arenas. Ever closer to Antarctica. - Photo by Kevin Fox
Comment on this photo

The three hour flight down to the southern tip of South America was absolutely beautiful. Volcanos, glaciers, rainbows and clouds. It was clear with every passing mile that we were finally well and truly distancing ourselves from the urban world. 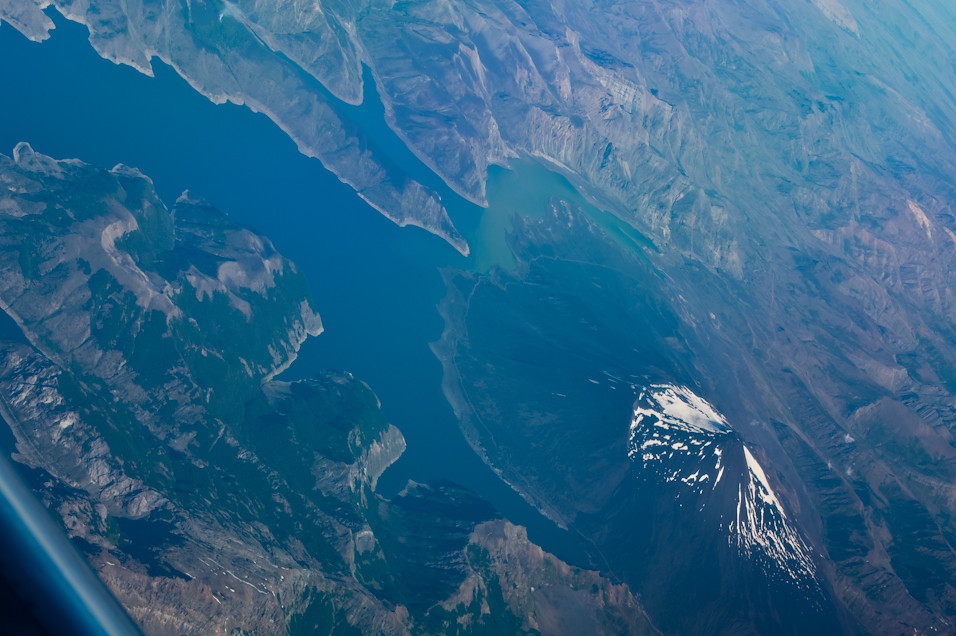 Looking Down - The results of glaciers and volcanoes and many many years as seen from the plane in southern Chile. - Photo by Rachel Lea Fox
Comment on this photo

White Capped Waves - Old volcanoes snowed over. With the mountains they look like foam capped waves on the ocean. Seen in Southern Chile from the plane. - Photo by Rachel Lea Fox
Read 1 comment 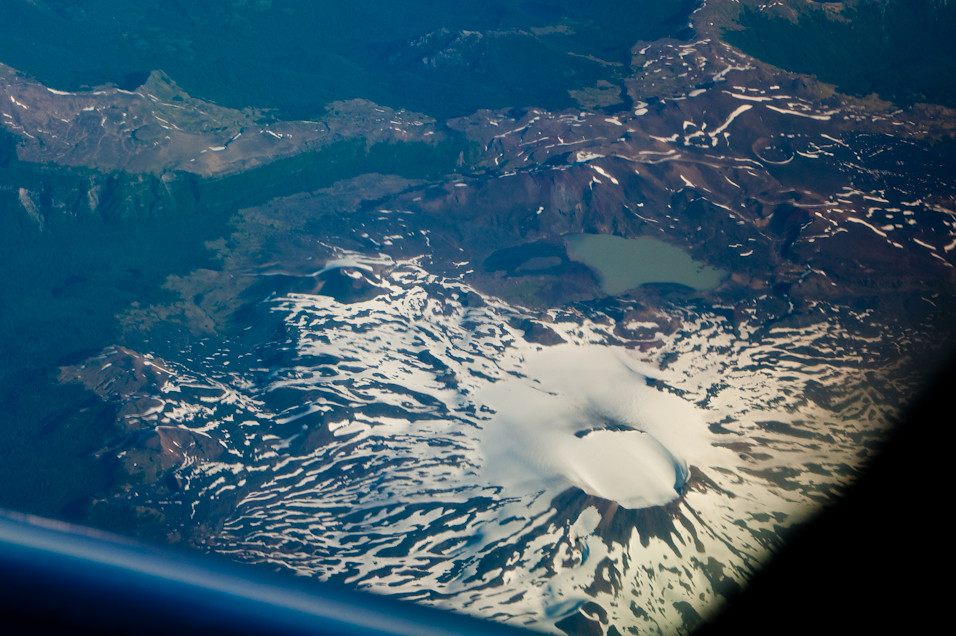 Fire to Ice - An old volcano now snowed over in southern Chile as seen from the plane. - Photo by Rachel Lea Fox
Read 2 comments 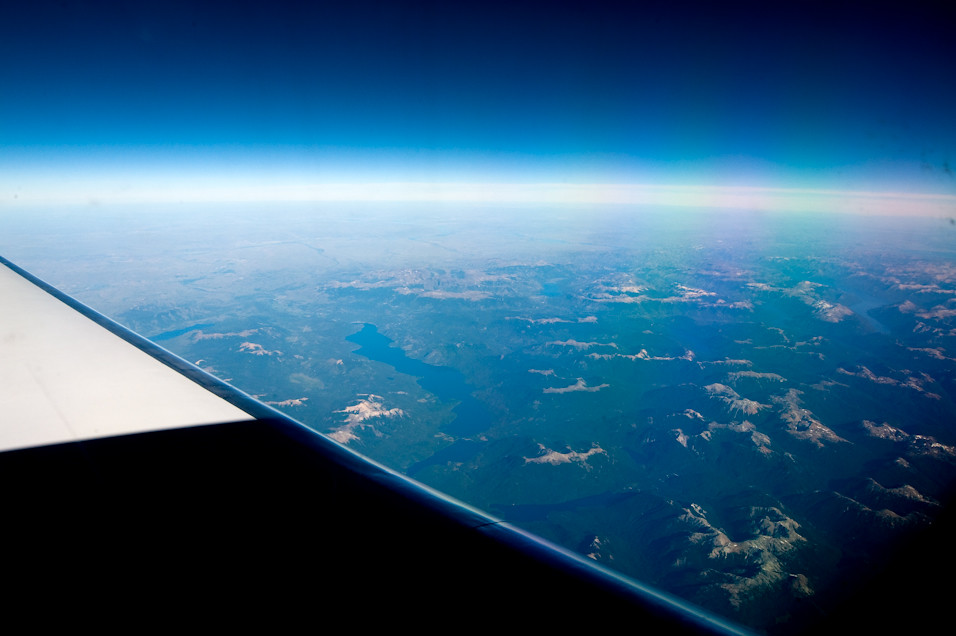 End of the World - Southern Chile over the wing and extending off into forever. - Photo by Rachel Lea Fox
Comment on this photo 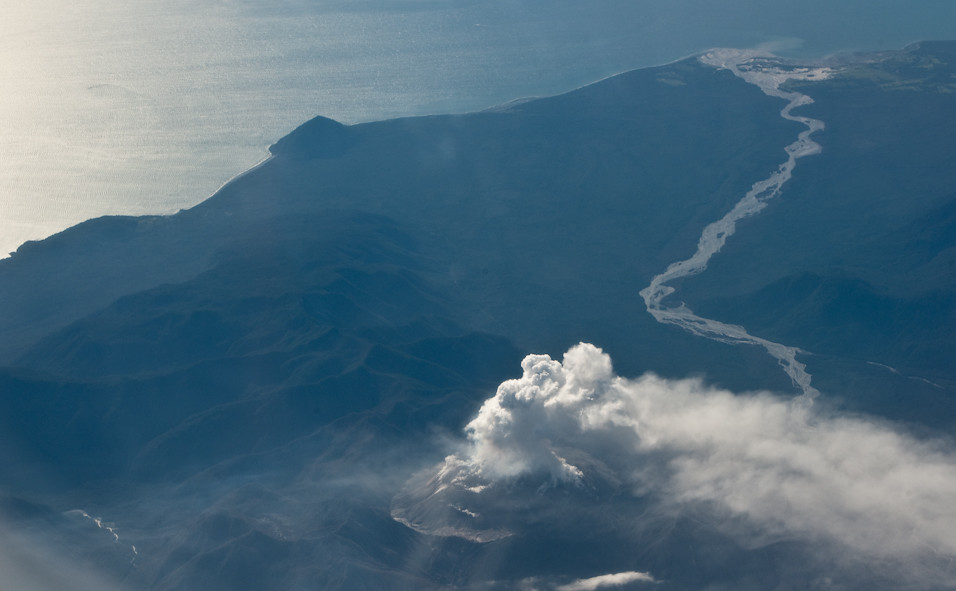 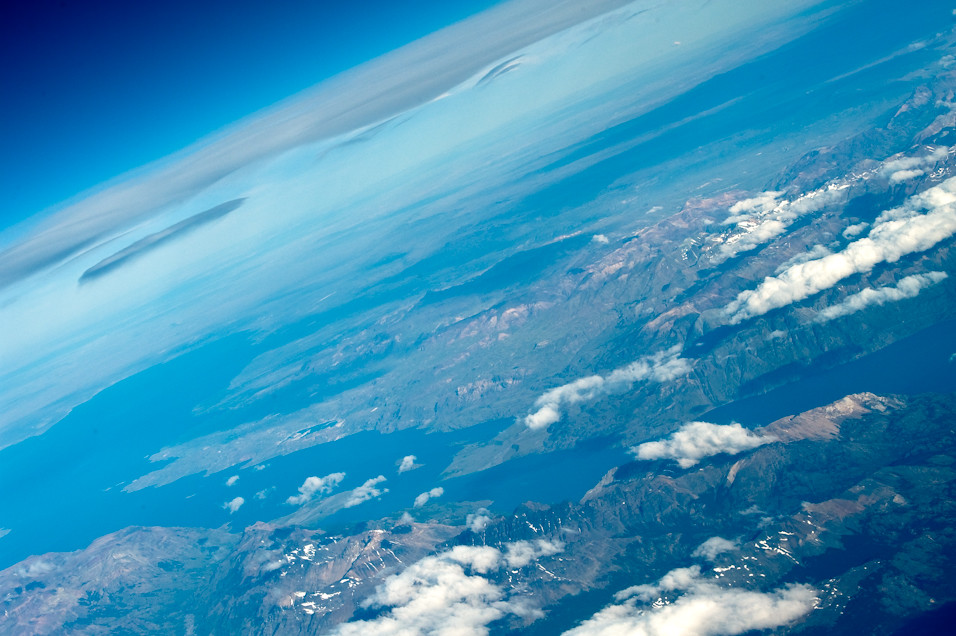 I Can See For Miles and Miles.... - Flying over southern Chile. - Photo by Rachel Lea Fox
Comment on this photo 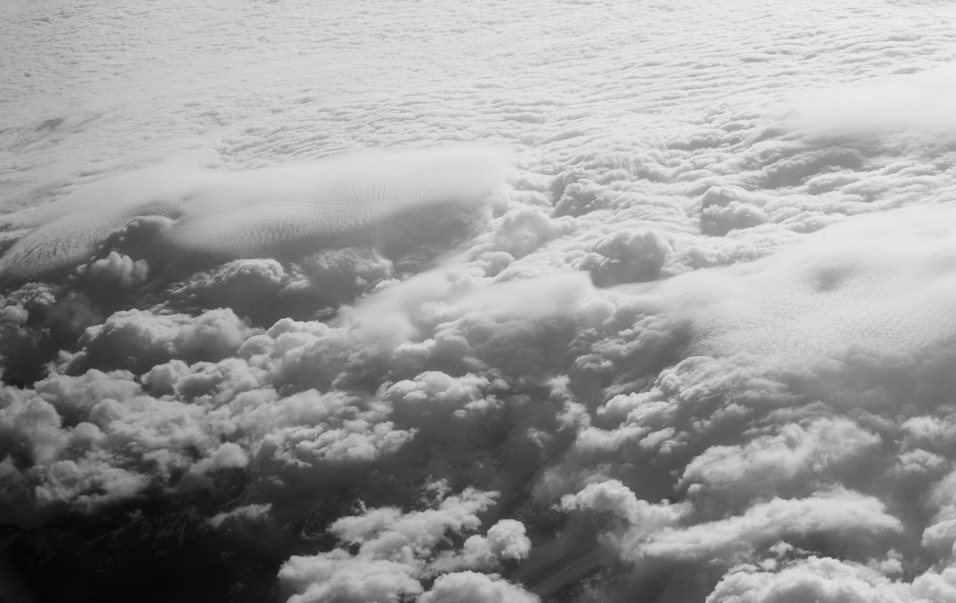 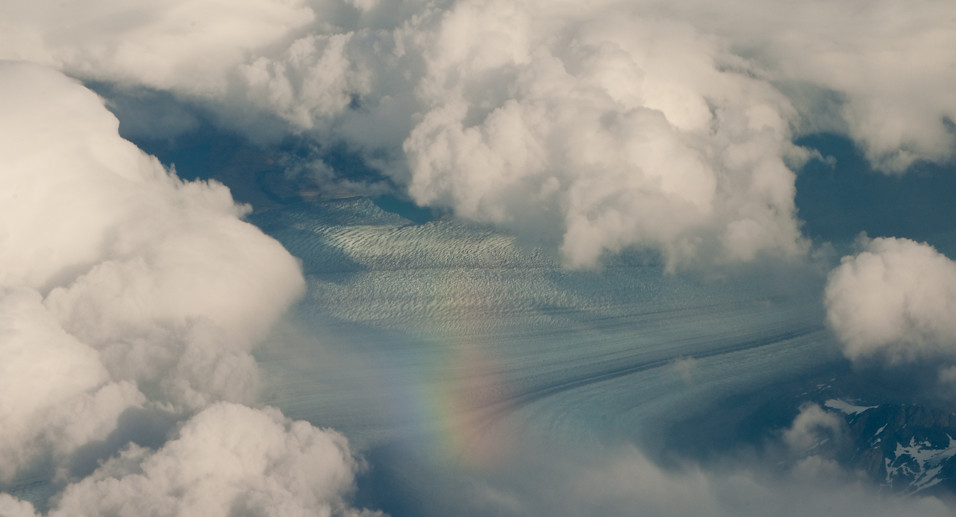 Glacial Rainbow - A little color for this glacier as we fly over southern Chile. - Photo by Kevin Fox
Comment on this photo

Arriving in Punto Arenas at about 9pm we met our naturalist, Rob. A Kiwi and, as we were soon to find out, an incredibly funny and knowledgeable person. We quickly checked in to our hotel and Rob led us on a walk to a local restaurant for Christmas dinner.

Established by a directive from the Chilean government 165 years ago, Punto Arenas serves as a shipping and outfitting outpost at the edge of the Straits of Magellan. The town lives and breathes nautical history. Countless antarctic expeditions have set off from here, and the city gained relevance as a coaling station, refueling cargo and passenger steamships on their way between the Atlantic and Pacific oceans prior to the completion of the Panama canal.

This was where Earnest Shackelton's men first rejoined civilization after their rescue in 1917, and on our bus ride from the airport, we could see the Ushuia being repaired in dry-dock. The Ushuia ran aground on an uncharted rock only a month ago while traversing the same Antarctic waters we would soon be visiting. All 122 passengers were rescued without incident, but it served as a tangible reminder that this was no Caribbean cruise we would be embarking on tomorrow.

Today, Punta Arenas retains a lot of its rustic nature, and this was evidenced on our walk by the barks and cries of dogs a few blocks away as we walked through the darkening twilight. Keeping an eye out, I soon saw what could only honestly be called a pack of wild dogs trotting down the street, alternatively nipping at each other and attacking the wheels of cars as they slowed at stop signs.

Thankfully, they never turned down to our block, but as I would learn later there is actually a problem with these dogs confronting pedestrians on the street, and locals grab rocks and throw them at the dogs so that now all one needs to do is reach down to the ground when a dog starts to approach you and it will run away. 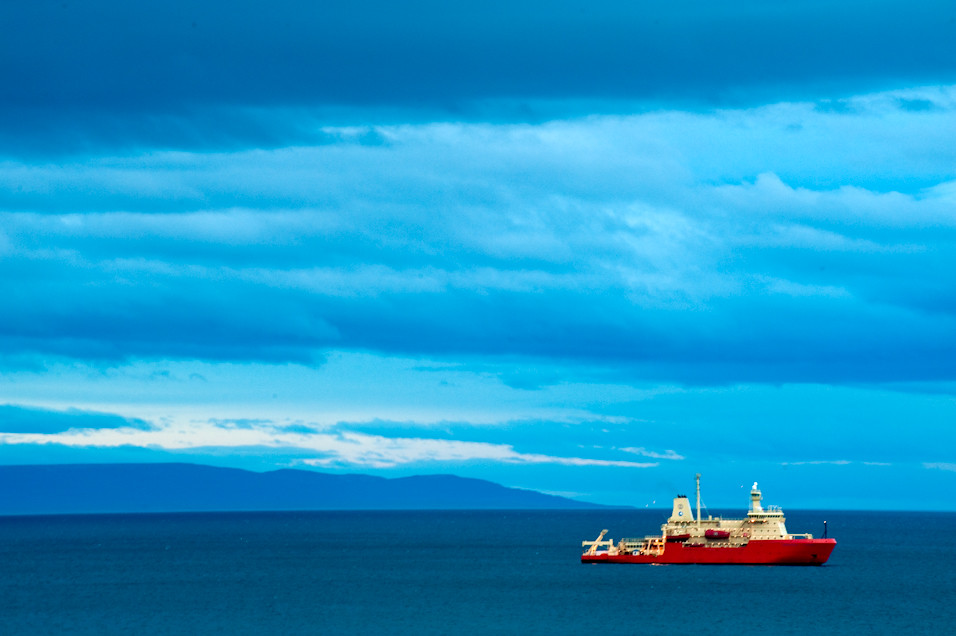 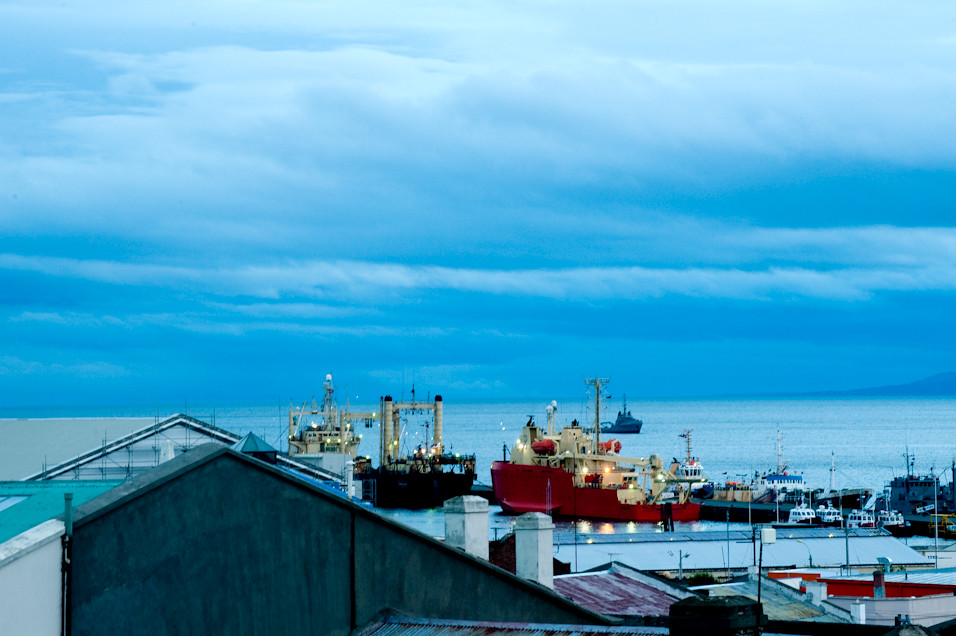 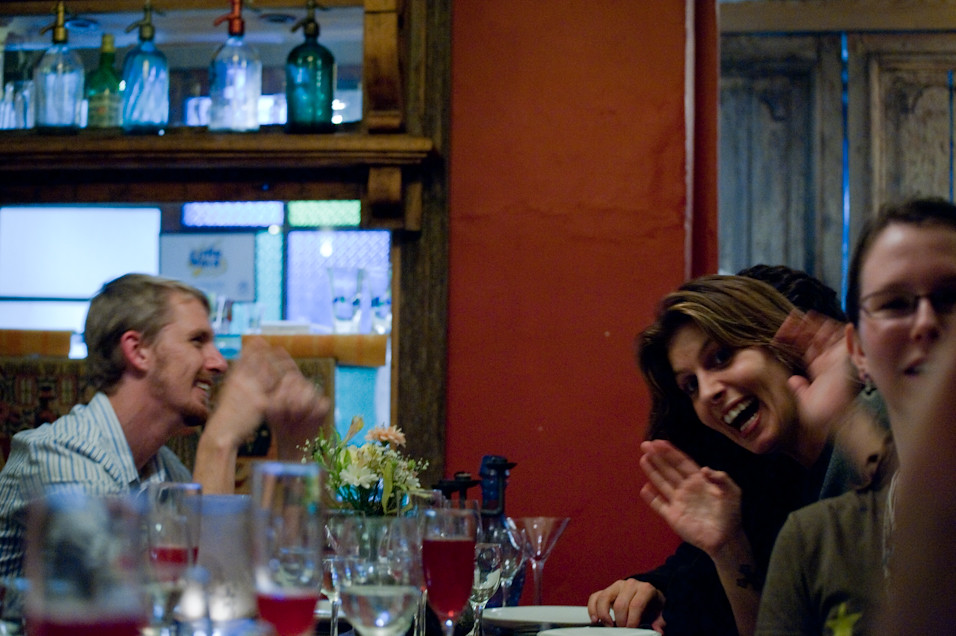 Excitement Builds - Christmas Dinner at midnight in Punta Arenas. Patricia is super excited, or maybe its that local drink we had ;) We will head out for Antarctica in the morning. - Photo by Rachel Lea Fox
Comment on this photo 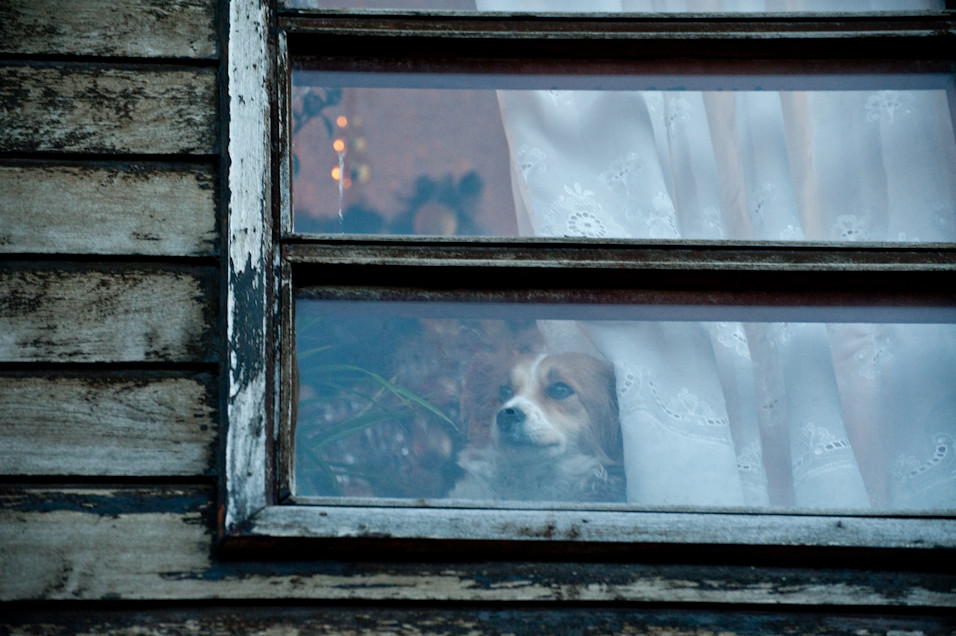 Christmas Longing - I think he is sad that Christmas is over. Taken from the street in Punta Arenas, Chile. - Photo by Rachel Lea Fox
Comment on this photo

After we finished our midnight dinner we did a final repacking to leave behind the things we wouldn't be needing in the Antarctic, and went to bed at 2am to catch four hours' sleep, because the next morning our adventure would begin in earnest, with our first surprise.

Read the next chapter: Day 1: The Herc